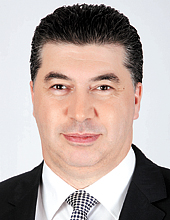 Kaher Kazem, the head of GM India, will helm GM’s Korean branch as chief executive, avoiding a leadership vacuum amid rumors that the carmaker may be pulling out of the Korean market.

“Kaher Kazem, the chief executive of GM India, will be appointed as the new CEO of GM Korea, replacing James Kim whose term ends on Aug. 31,” said GM Korea in a press release on Thursday. “He will start his term on Sept. 1 and will carry out the duty as the chairman of the board of directors of GM Korea.”

Kazem, who began his career at GM’s branch in Australia in 1995, has assumed a number of posts with the American carmaker.

He was the vice president in charge of regional production and quality in GM Thailand and Asean in 2009, before heading to Uzbekistan in 2012 to head the branch there. He was appointed as the chief operating officer of GM India in 2015 before being promoted to chief executive in 2016.

Kazem takes over the top post at GM Korea amid rising speculations that GM may be closing down its operations in the Korean market due to continuous losses.

GM Korea saw a hefty loss in the local market last year at about two trillion won ($1.75 billion). Current CEO James Kim announced last month that he will be leaving the post to concentrate on his role as the CEO and Chairman of the American Chamber of Commerce in Korea. Although he didn’t cite the recent performance as the reason behind his resignation, market insiders speculated the loss, as well as continuous disputes with the labor union, played a role in Kim’s decision.

GM has been pulling out of markets where it has struggled to perform. In fact, the carmaker will be leaving India after years of poor sales by the end of this year. GM is free to sell its stake in Korea starting this October under the agreement it made when it acquired Daewoo Motor in 2002, in which it pledged to maintain the management rights in Korea for 15 years.

GM Korea, however, denied the rumors, saying that the Korean market is central to its business strategy.

The new CEO confirmed the position.

“We will continue our growth [in Korea] by prioritizing consumers through the Chevrolet brand which has acquired a strong position in the Korean market,” Kazem said, according to the company statement.