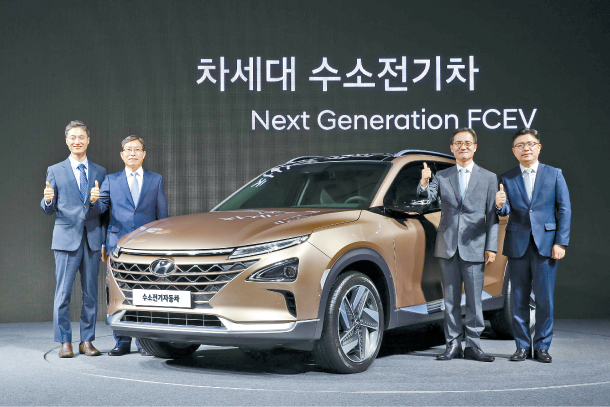 Hyundai Motor’s executive vice president, Lee Kwang-guk, second from right, and other company executives pose with the automaker’s newest fuel cell electric vehicle during a press conference on Thursday in Yeouido, western Seoul. The new car will hit the local market in the first quarter of next year. [HYUNDAI MOTOR]

Hyundai Motor unveiled the next generation of its hydrogen-powered vehicle on Thursday, part of the company’s effort to feed a growing consumer preference for eco-friendly cars.

The fuel cell model, a sport utility vehicle just like its predecessor, will hit the market during the first quarter of next year.

“Hydrogen-powered vehicles are the ultimate eco-friendly car because there is no danger of running out of the energy source and there are zero emissions,” Lee Kwang-guk, executive vice president at Hyundai Motor, said during a press conference at Yeouido in western Seoul.

Hydrogen-powered vehicles can also take in carbon dioxide to generate oxygen, said Lee Ki-sang, senior vice president in charge of electric vehicle development. “If we run one hydrogen vehicle for 15,000 kilometers [9,300 miles] in a year, we can purify enough air for two adults to breathe.”

Hyundai’s new fuel cell model has witnessed a number of improvements compared to its predecessor, which was a hydrogen derivative of the company’s flagship Tucson SUV released in 2013.

The Tucson ix Fuel Cell was the world’s first mass-produced hydrogen-powered vehicle, the company said, but it initially came with a hefty price tag of about 150 million won ($132,000).

The price has since fallen to around 80 million won but is still out of reach for many in the general public.

Sources in the industry speculate that Hyundai’s new hydrogen model will start at around 70 million won. A spokesperson from Hyundai said the price of the new car has not yet been set.

In terms of powertrain, the previous model could generate about 129 horsepower. The new model is capable of generating 163 horsepower, an increase of about 20 percent, to match the capacity of internal combustion engines. Hyundai’s Tucson with a 1.6-T gasoline engine can generate 177 horsepower.

The company added that it improved the ability of the vehicle to withstand cold weather, a crucial element that the automaker believes will determine the commercial viability of hydrogen-fueled cars.

Other global automakers have attempted to mass-produce hydrogen vehicles but often hit a bump. Toyota Motor, one of the first pioneers of the technology, first released its own hydrogen-run vehicle, the Mirai, in 2014, but earlier this year, the Japanese carmaker had to recall nearly 3,000 Mirais due to an issue with output voltage.

Hyundai Motor is running a hydrogen fuel exhibition at the Han River Park in Yeouido in western Seoul through Nov. 17 in partnership with the Seoul Metropolitan Government to demonstrate the vehicle and how fuel cells generate electricity.

During the press conference, the automaker also offered its road map for the future, which includes a drastic expansion of its electric vehicle lineup.

The company last year had originally set a goal of developing 28 different electric car models by 2020 but raised the target on Thursday to 31, with the objective of becoming the world’s second-largest electric vehicle maker after Toyota.

Hyundai’s first small-size SUV, the Kona, which it released earlier this year, will reborn as an electric vehicle by the first half of next year.

By 2021, it plans to launch an electric version of the luxury Genesis sedan.