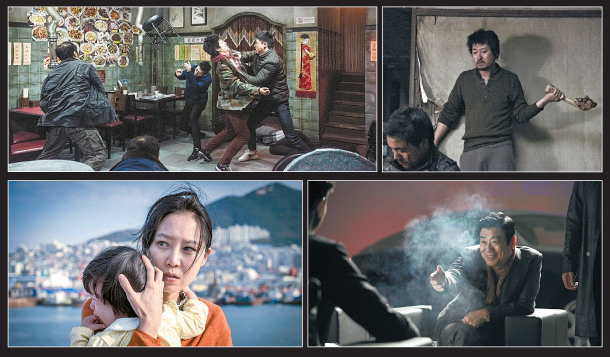 Movies often provide a means of understanding foreign cultures and create an image of people from different countries. In other words, they are highly influential to audiences who often form stereotypes about certain groups of people or countries based on what they see on screen. In Korea, this phenomenon is most obvious in the depiction of ethnic Koreans from China.

In domestic films, Korean-Chinese (mostly from the Yanbian Korean Autonomous Prefecture in northeast China) are often depicted as being barbaric, brutal and poor. Most of the time, they are shown to be the “problem solver” in criminal acts, willing to do anything for the sake of money. Physically, they are usually dressed in filthy clothes with messed up hair and rely on primitive tools like axes or sharp animal bones.

This image of Korean-Chinese has resurfaced in a few recent films like comedy “Midnight Runners,” which has sold 2.9 million tickets as of Wednesday, and the R-rated action-noir “Real,” released late June.

In “Midnight Runners,” a group of Korean-Chinese appear to be the core culprits behind a crime that involves kidnapping young girls to sell them off to an obstetrician, who forcefully retrieves their eggs for his infertile patients. The Korean-Chinese in the film commit brutal violence on not only the kidnapped girls, many of whom are locked up in a filthy cell where they bleed to death, but also on the main heroes of the movie: two students from Korean National Police University who persistently track down the Korean-Chinese criminals.

“I thought a lot on how to depict Korean-Chinese,” said director Kim Ju-hwan during a press preview held late last month. “Just like the former Soviet Union was featured as the main antagonist of [Hollywood] films during the Cold War, I hope [my depiction of Korean-Chinese in the flick] can be generously understood as a cinematic tool rather than prejudice against them.”

In “Real,” starring superstar Kim Soo-hyun, a Korean-Chinese gangster boss (Sung Dong-il) is featured as the villain, who tries to steal a casino business from Kim Soo-hyun’s character. The boss, of course, is depicted to be very brutal - enough to force his henchmen to eat a poisonous frog and to beat one of them to death using a cooking pan.

One Korean-Chinese character was depicted in a different way in last year’s mystery film “Missing,” in which a Korean-Chinese nanny one day runs away with a Korean baby she was taking care of. Despite a more generous depiction of the character, the role was still portrayed as a potential criminal.

“Korean-Chinese in Korean movies usually play gangster roles, fighting and killing people,” said 26-year-old Korean-Chinese Xin Guangchun. “I believe these depictions give a negative influence on the image that Koreans, especially those without Korean-Chinese friends, already have.”

“I have actually felt such prejudice and discrimination while living and working in Korea, as I can often feel people not really liking [me] when I tell them I’m a Korean-Chinese.”

The negative depiction of Korean-Chinese stems from filmmakers’ desire to trigger curiosity and fear from uncharted territory, according to culture critic Hwang Jin-mi.

“To make [a film’s antagonist] scarier, those from less known cultural backgrounds and [seemingly] less civilized people [who live and work] in Korea are often featured as antagonists. Korean-Chinese fit into that image, which is different from the reality, in which majority of them work at diners to send money back to their families.

“Similar things happen in foreign films. African Americans or Mexicans are featured as criminals in American movies, while people from eastern Europe or the Middle East are featured as antagonists in Western European films,” Hwang said. “Filmmakers often don’t think about what social implications these depictions could cause. They’re not taking responsibility for how much their depictions could deter social integration.”

Regarding the reason behind the depictions, culture critic Ha Jae-geun similarly said, “Korean-Chinese are seen as foreigners, and therefore, do not have an active voice in Korean society. But the depiction of Korean-Chinese is a serious issue that creates greater prejudice against them.”