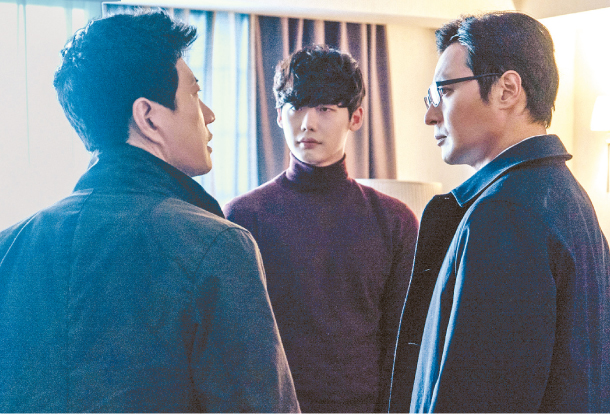 Director Park Hoon-jung’s upcoming crime film “V.I.P.” is a full-throttle manhunt to track down a high-profile North Korean defector who is the prime suspect in a serial murder case.

The star-studded flick starring Jang Dong-gun, Kim Myung-min, Park Hee-soon and Lee Jong-suk, was invited to this year’s Venice International Film Festival, set to kick off on Aug. 30. But the production company turned down the invitation because the movie’s release date had to be rescheduled to attend the international film event.

“Though we truly wanted to go to the film festival, the release date was settled in advance, and it wasn’t easy to rearrange the schedule,” said the filmmaker, known for his 2013 film “New World,” during a press preview held in Yongsan, central Seoul, on Wednesday.

Presented by Warner Bros. Korea, “V.I.P.” follows a North Korean defector (Lee), the son of a key political figure, as he is chased by an international group of intelligence officials tracking him down - each with their own agenda.

A national intelligence agent (Jang), a South Korean police detective (Kim), a North Korean secret agent (Park) and a team from the U.S. Central Intelligence Agency all fight their way to be the first to hunt down the suspect.

Central to the movie’s plot is the so-called V.I.P.’s planned defection to the South for a specific purpose other than escaping the North Korean regime.

“Though planned defection may not have been dealt with in movies before, it’s something that has actually happened in modern history,” the director said.

“I wonder how [the audience] would feel after watching the movie. I want the [audience] to at least perceive the film as a devoted genre movie,” he added.

Though the four characters continuously collide with each other in the movie, the set’s atmosphere was completely the opposite, according to Kim.

Lee, who plays a villain for the first time, said that he was initially scared of taking on the challenge.

“I learned a lot [by playing the role]. There were lots of scenes where I need to smile,” Lee said and added that the filmmaker directed him on how to smile and even how much he should reveal his teeth.