49 farms were producing eggs with pesticides

49 farms were producing eggs with pesticides 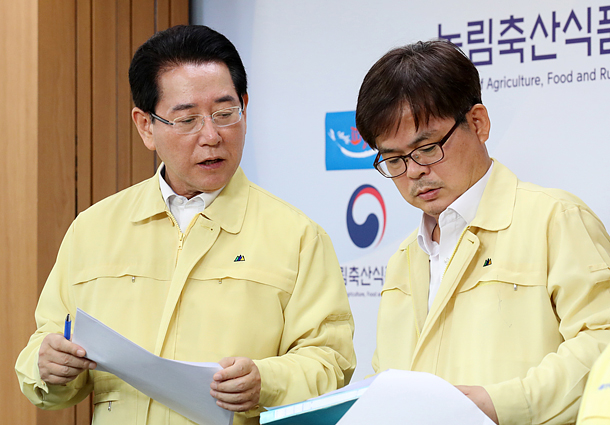 Minister of Agriculture, Food and Rural Affairs Kim Young-rok, left, and Heo Tae-woong, the ministry’s director general for food policy, prepare for a press briefing at the Sejong Government Complex on Friday. [YONHAP]

The number of farms producing eggs with excessive levels of pesticides rose to 49 Friday, 17 more than the previous day.

The Ministry of Agriculture, Food and Rural Affairs said Friday it finished inspections of all 1,239 chicken farms operating in the country.

Among the 49 farms found to be overusing pesticides, 18 were regular farms and 31 were supposed to be environmentally friendly farms.

Seven of the 49 farms produced eggs with levels of fipronil beyond international standards; in Korea, fipronil is not supposed to be used on chickens at all. On 37 farms, eggs had levels of bifenthrin exceeding the country’s limit of 0.01mg/kg.

Five farms produced eggs with traces of etoxazole, flufenoxuron and pyridaben. These pesticides are not allowed on Korean chicken farms.

Minister of Agriculture Kim Young-rok said that all eggs distributed starting Friday are safe and that people can trust the inspections, which followed scientific procedures.

“We will allow eggs from 1,190 farms that passed inspection to be distributed to the market right away and this will be about 95.7 percent of eggs produced in the country,” said Kim Yong-sang, a director of the agriculture ministry. “We will collect all eggs from farms that didn’t pass inspection and destroy them and inspect those farms every two weeks from now on.”

Criticism is mounting of the government’s poor management of the farms and its handling of the current crisis.

The Agriculture Ministry first found out about farms producing eggs with excessive levels of pesticides on Monday around noon. But it didn’t announce its findings until 11 p.m. that night, allowing a lot of contaminated eggs to be distributed.

On Wednesday the ministry announced an infected farm was in Gwangju, Gyeonggi, but it actually was Yangju. Reporters had to alert the ministry to its mistake. The government’s updates on the number of affected farms continued to change throughout Thursday as the ministry sent out corrections to the press.

All three major opposition parties said Minister of Food and Drug Safety Ryu Young-jin should resign. In his first press briefing on Aug. 10, Ryu was asked about the contaminated egg scandal in Europe and he said there was no farm in Korea using excessive amounts of fipronil and people could consume locally produced eggs without worrying. Excessive levels of pesticide were found in farms just five days later.

Ryu was criticized by lawmakers at a briefing at the National Assembly on Wednesday as he answered many questions: “We are currently tracing it.”

Prime Minister Lee Nak-yon scolded Ryu for not being able to answer questions related to eggs at a meeting on Friday. “Many of the questions that we discussed today can come from people and reporters at press briefings anytime,” Lee told Ryu. “Don’t hold a press briefing if you are not going to be able to answer questions correctly.” Lee asked Ryu to bone up on the issues surrounding eggs and to tell people and reporters when he is finally briefed.

Meanwhile, the Korean Medical Association held a press briefing Friday and said pesticides found in eggs will leave a human body within a month. It added that it doesn’t expect any cases of acute toxicity coming from consuming contaminated eggs. Even a year old infant could consume two contaminated eggs per day and not face a toxicity problem, it said.

Large discount chains resumed selling eggs after suspending sales earlier this week. According to Emart on Friday, sales of eggs on Thursday dropped 46 percent when compared to a week earlier. Lotte Mart said its egg sales Thursday were only 55 percent of the average in the past. Egg prices at major discount chains were not changed significantly.