Luckiest layers may produce eggs of the future

Luckiest layers may produce eggs of the future 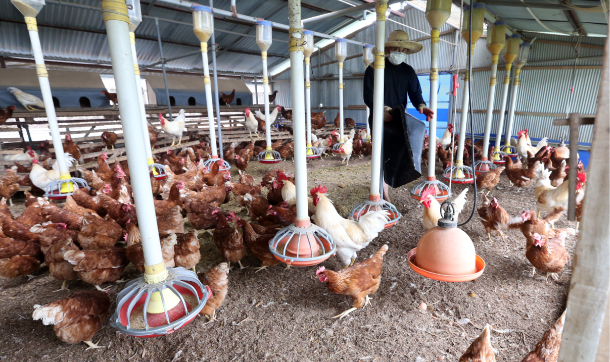 Lee Woon-kook, 46, feeds hens at his free-range egg farm in Danyang, North Gyeongsang, on Wednesday. His farm, which produces eggs in the organic way, is designated by the government as an “animal welfare livestock farm.” [YONHAP]

Eden Farm in Yeoju, Gyeonggi, has 4,400 layer hens raised in the free-range, organic style. They are fed twice in the morning with organic feed from a farm in Anseong. The main ingredient is corn that was grown free of pesticides and chemicals. After leaving their henhouses at around 11 a.m., the chickens spend six to seven hours roaming relatively free and feeding on grass.

“The chickens are so active,” said farm owner Sohn Seong-il. They clear out the grass in one area in just two to three weeks.”

Around 5 p.m., the hens return to their abode, fill their stomachs with feed once more and go to sleep. Their spacious henhouse has no iron cages.

“For free-range chicken eggs, it’s hard to make ends meet if they are distributed and sold as ordinary eggs,” said Sohn, “so we usually sell them directly to certain retailers like department stores.”

In Korea, there are only 14 free-range egg farms like Eden. None of them were included in the list of farms that produced pesticide-contaminated eggs.

Domestic egg farms are categorized and labeled into three types according to their level of eco-friendliness: 556 general farms that are allowed to use certain pesticide under a standard amount, 683 eco-friendly farms banned from using pesticides and antibiotics and 14 free-range farms.

Free-range egg farms cannot use pesticides, antibiotics or growth accelerators. The feed they give layer hens have to be strictly eco-friendly with pesticides and chemical fertilizers excluded from the components.

The main difference from eco-friendly farms is the space given each hen. Hens on free-range farm must have 0.22 square meters (2.4 square feet) of space, more than fourfold the 0.05 square-meter cage - smaller than a sheet of A4 paper - used on general egg farms.

Hens stuffed in cages are more prone to mites and insects, so farms use pesticides. They eventually enter the hen’s body and its eggs. Free-range hens, on the contrary, can roll around in dirt, which naturally kills mites, or eat them, ruling out the need for pesticides.

Farm specialists say local egg farms should ultimately aim at converting wholesale to free-range cultivation. In fact, the use of cages is considered one of the main contributors to the current egg crisis.

But price is a problem. Even before the crisis, an organically grown tray of 20 eggs was sold for 16,000 won per unit. At discount chains, 15 eggs raised without antibiotics are sold for around 6,000 won and 15 ordinary eggs are sold for 4,000 won - a lot cheaper than organic.

“We can’t shift every farm out there to free-range immediately but raising public awareness of the necessity to gradually improve the cage farms is a task we should embark on,” said Lee Hye-won, a veterinarian at Konkuk University’s “Institute for the 3Rs,” which works to enhance animal welfare.

Overseas, consumers’ interest in higher quality food and animal rights has increased over the past decade. The European Union banned the starting of new chicken farms using batteries of cages, similar to Korea’s, since 2003.

Some global retailers have launched efforts to reduce sales of eggs from hen farms using cages. Last year, leading discount chain Walmart of the U.S. and No. 3 Tesco of the U.K. both pledged to completely halt sales of caged-hen eggs by 2025. The void will be filled by eggs produced in the free-range or organic methods.

“We expect that as cage-free eggs shift from a specialty product to the industry standard over the next decade, that change will be reflected for our customers in pricing,” says Walmart spokesman Kevin Gardner.