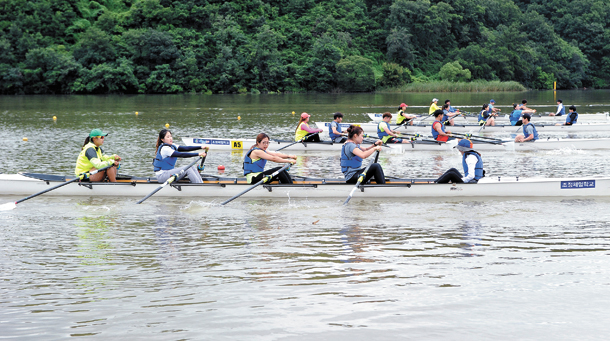 With only six months remaining until the PyeongChang Winter Olympics, the Korean national curling team chose to train on water instead of ice, and so rather than sweeping brooms, they have been working on their paddle strokes.

Curling is played in teams of four in both the men’s and women’s events, so when they took to their racing shell, they used a 4-person boat with Kim Eun-jung as their coxswain.

Unlike basketball, where a weak team can still advance by having one good player like LeBron James, in curling, one good player simply isn’t enough. As in rowing, curling requires teamwork and balance to slide the stone.

This is so important that some even refer to the sport as “chess on ice,” but Kim Young-mi, member of the women’s curling team, believes it can be just as physical as mental.

“In curling, in each end, we sweep the ice about six times,” Kim Young-mi said. “We sweep about 45 meters (148 feet) each time and there are about ten ends, so in each game, we sweep about 2.7 kilometers of ice.”

Since each game takes about 2 to 3 hours, a good deal of endurance is required. In international events, qualification rounds are played in full league, meaning each team has to play more than ten games.

“Since rowing doesn’t allow any breaks, upon completion of the event, players have lost about one to two kilograms [2.2 to 4.4 pounds],” said Lee Jin-sook, head of Chungju Rowing Academy. “Rowing will be a big part of the curling team’s training.”

At the upcoming Olympics, the Korean team set a goal of medaling in all three events: women’s, men’s and mixed doubles. And they already have the chops needed to succeed. The women’s curling team won silver at the Sapporo Asian Winter Games in February and the mixed team finished sixth at the World Championship in April.

But they aren’t financially well supported, and there are only six months remaining until the Games. This is because the Korea Curling Federation (KCF) is having a leadership crisis, as it was found in June their ineligible members had voted for Jang Mun-ick in the KCF presidential election last September.

Since then, Kim Kyung-doo, the KCF vice president, has been serving as the interim leader.

“The PyeongChang Olympic support group was established in Feb. 2016,” said Kim, “but I only found out about it in July.”

The teams are eligible to receive support, such as having foreign coaches, if they submit their training logs, but many have said an associate in the KCF kept the logs a secret on purpose because they weren’t happy with the fact that many of the national team members were created with players from the North Gyeongsang Sports Council.

Due to poor communication in the KCF, the Korean national curling team has yet to train at Gangneung Curling Centre. The Ministry of Culture, Sport and Tourism has therefore begun a five-day audit of the KCF. For now, the team’s fate remains uncertain.

“We would have been able to perform better if we were given a better environment to train at,” said Lee Ki-jeong, a member of the Korean curling mixed double team.