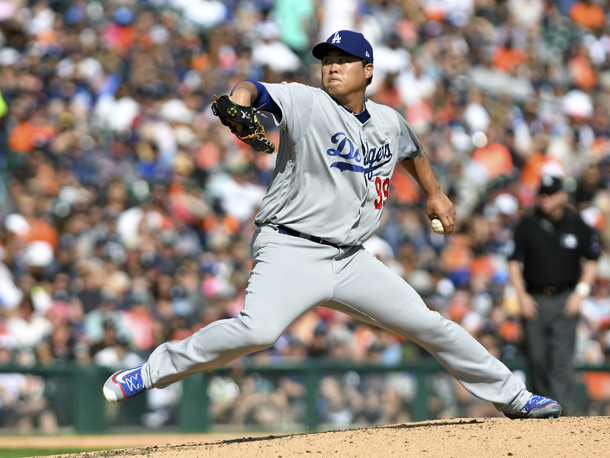 Ryu Hyun-jin of the Los Angeles Dodgers throws during a game against the Detroit Tigers on Saturday. [AP/YONHAP]

Ryu Hyun-jin of the Los Angeles Dodgers pitched five scoreless innings against the Detroit Tigers at Comerica Park in Michigan on Sunday. Although Ryu recorded another no-decision, the Dodgers went on to win 3-0.

Throughout the five innings, Ryu gave up three hits and four walks while striking out four, making a total of 89 pitches. As Ryu was switched out for Ross Stripling in the sixth while the Dodgers were tied at 0-0, he wasn’t able to pick up the win but was able to lower his ERA from 3.63 to 3.45.

The Tigers, who have performed well against left-handed pitchers so far this season, assigned all right-handed batters in the starting lineup against Ryu. Aside from Ian Kinsler, who managed a two-base hit and two walks, the southpaw was able to either strikeout or ground the Tigers’ batters with fastballs, at 150 kilometers (93.2 miles) per hour, and cutters. Once Ryu left the mound, the Dodgers scored a run each in the seventh, eighth and the ninth for a win.

Ryu’s record this season is at four wins and six losses, but recently he has been pitching as well as he used to before his surgery three years ago. With the game against the Tigers, Ryu exceeded 100 innings for the first time in three years, which would have been good enough to be the second or third pitcher in the starting rotation in any other team. 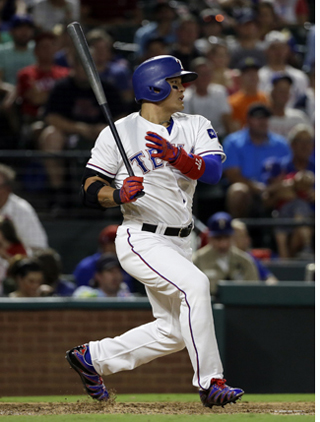 Since the Dodgers have one too many pitchers in their starting rotation, Ryu has been competing for the fifth spot against Kenta Maeda throughout the season.

Making it worse, Ryu had to take a month off after getting hit in the foot during the game against the LA Angels on June 29. After a month off, Ryu returned to the team stronger, pitching scoreless innings in three of the five games he started in.

Though he was only able to pick up one win in the five games, the Dodgers won all of them. Just by looking at the second half of the season, Ryu has the lowest ERA, at 1.55, among the Dodgers’ pitchers that started in five or more games.

The Dodgers are also having a great season, ranking first in the major league National League with 87 wins and 34 losses as of Saturday’s game. At their current pace, the Dodgers are hoping to exceed the Seattle Mariners’ record for the highest number of wins - 116 wins and 46 losses - set in 2001.

Since Clayton Kershaw and Alex Wood will make their return at the end of the month, it is likely that the two will be the Dodgers’ first and second pitchers in the rotation. The Dodgers planned to have Rich Hill and Darvish as their third and fourth pitchers, but with Darvish getting assigned to the disabled list due to back pain, Ryu may be in with a shot to remain in the rotation.

There’s still a very low chance of Ryu playing as the starting pitcher in the postseason, as Kershaw, Wood and Rich Hill are all left-handed pitchers. However, with Ryu’s continuous success in the second half, his chance of making it to the postseason as a relief pitcher is increasing.

Choo Shin-soo, a veteran Korean major leaguer, had the best game of his season, hitting his 15th home run, to help the Rangers win 17-7 against the Chicago White Sox at Arlington Globe Life Park on Saturday.

Choo, who played as the Rangers’ second batter and right fielder, was four-for-six with three RBIs and three runs. With that, Choo’s batting average is now at 0.257. Choo had the Rangers’ first hit against Derek Holland while the count was at three balls and one strike.

Though the Rangers got off to a slow start, allowing the White Sox to take the lead by giving up five runs in the first, they quickly took the lead back by scoring six runs each in the third and fourth.

Choo’s bat exploded in the sixth, hitting a three-run home run against Chris Beck over the right fence. This was Choo’s first home run in 29 days, since the game against the Tampa Bay Rays on July 22.