Jeonbuk claim 100th victory since league was split in two

Jeonbuk claim 100th victory since league was split in two 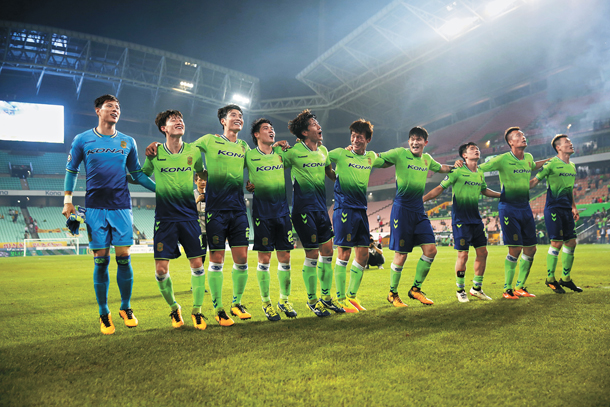 Jeonbuk Hyundai Motors made history on Saturday. With a 3-1 victory against Gwangju FC, Jeonbuk became the first K League Classic team to win 100 games since the promotion and relegation regulations were established in 2013 and the league was split in two.

This was Jeonbuk’s first match since Shin Tae-yong, head coach of the Korean national football team, announced his 26-man roster. Of the 26 players, Jeonbuk managed to add six players - Lee Dong-gook, Kim Min-jae, Kim Shin-wook, Lee Jae-sung, Choi Chul-soon and Kim Jin-su - to the national team. As this was also the last K league match before the national team call up, the players expected to join the national team proved their ability throughout the match.

Kim Min-jae, who got added to the national team for the first time, scored his second goal of the season in the 30th minute to allow Jeonbuk to take the lead. Then, in the 67th minute, Lee Jae-sung assisted Lee Seung-gi’s goal and finally, during overtime, Lee Dong-gook also assisted Kim Shin-wook’s goal to record the 70th assist in his career.

Aside from their 100th win, Jeonbuk extended their lead over Ulsan Hyundai to six points. Jeonbuk recorded 100 wins in four years despite only playing 38 matches per season including the split round.

With the exception of the 2013 season, Jeonbuk has managed to win more than 20 games per season since the new regulations were established. This season the team have recorded 16 wins with 11 games still remaining, putting them comfortably on track to break the 20 barrier once again.

Jeonbuk owe some of their success to their impressive home game advantage. Since 2013, the team has recorded 59 wins, 17 ties and 13 losses in matches played at Jeonju World Cup Stadium. Of the 100 matches, 94 were victories earned under Choi Kang-hee, Jeonbuk’s head coach.

“I think this is a record the players made,” said Choi. “This was only able to be accomplished from the players’ effort.”

Their victory once again raises Korean football fans’ expectation for the upcoming final World Cup qualification matches, as so many players on the national team come from the Jeonbuk squad.

Not only the K league players, but also Koreans playing in foreign leagues have excelled in the lead up to the qualifiers. Kwon Chang-hoon, midfielder for Dijon FCO, scored his Ligue 1 debut goal against Rennes at Stade de la Route de Lorient in Renneson on Saturday. Kwon helped Dijon to draw 2-2.

While Dijon was losing 0-2 in the 51st, Kwon successfully scored a goal to trail Rennes by one. This was Kwon’s first goal in the French league since he left Suwon Samsung Bluewings in January.

Hwang Hee-chan, striker for Red Bull Salzburg, has had a great start to the season, scoring six goals already in ten matches in the Austrian Bundesliga. Both Kwon and Hwang were a part of Shin’s team at the Rio Olympics, where Korea advanced to the quarter finals.