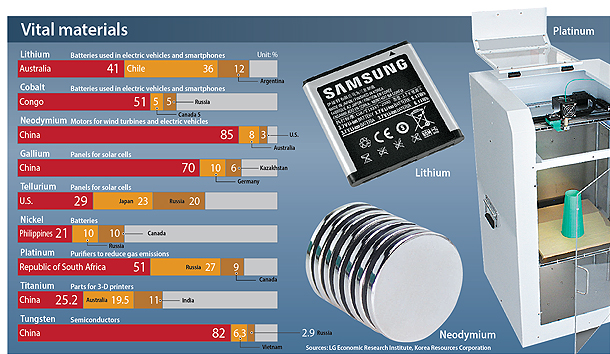 The prices of certain materials are used in smartphones, electric vehicles and to generate renewable energy are rising.

Prices of traditional energy sources like crude oil and natural gas are falling due to oversupply. But the global natural resource market is changing with the onset of the fourth industrial revolution and technological developments in IT and renewable energy, making new materials more important, more in demand - and more expensive.

According to LG Economic Research Institute and Korea Resources Corporation on Tuesday, lithium and cobalt are the materials changing the market paradigm. They are key materials in batteries used in smartphones, laptops and electric vehicles. Lithium is light and improves the capacity of batteries. Cobalt improves battery output. As the demand for such materials rises, prices have skyrocketed - by some 300 percent since the beginning of last year.

The price of neodymium, a key part in the magnets used in electric motors for wind turbines, has also risen sharply.

Titanium is stronger than steel and only half its weight. Titanium is a key material in 3-D printers. As 3-D printers are commercialized, demand for titanium is climbing fast.

“Securing these materials will be the mandatory for developing these technologies and industries from now on,” said Koo Chung-mo, a director at the Korea Resources Corporation. “Many countries are now competing fiercely to secure these rare resources.”

China has a central place in the story of these materials. About half of all cobalt is produced in the Democratic Republic of the Congo but most of it is refined in China. China supplies refined cobalt to major IT companies across the world. Its key role was possible after it invested heavily in shares of the Congo’s mining industry.

China also is the biggest source of such rare earth elements like neodymium, gallium and indium.

The United States is focusing on supplies of rare earth elements. According to the New York Times and NBC News, U.S. President Donald Trump is planning on expanding the number of U.S. troops in Afghanistan to exploit natural resources produced there.

Japan has been exploring ocean floors to reduce its dependency on rare earth elements produced overseas. Some of the other developed countries like the United Kingdom and Australia are devising policies for their companies to invest more in the mining sector.

In Korea, many took notice in 2010 when the Chinese government decided to ban its exports of rare earth elements, which threatened Japan’s components and electronics industries. The Korean chemical industry has concerns about major exporters of natural resources choking off supplies. Korean companies like Posco and LG International have started to work on securing natural resources recently, but many analysts believe that they are already too late.

“We need to try every possible measure such as strengthening diplomatic ties with the resource-rich countries, investing more in exploring resources and developing technologies using recycling materials from now on,” said Kim Kyung-yeon, a researcher at the LG Economic Research Institute.