Twitter posts of people’s short “poems” were popular among internet users. Clock-wise from top right: “I know it’s funny but stop looking at my phone” “Further than Sadang, closer than Uijeongbu.” “The door opens and you come in. Come in after I get off, jerk.” “Get in when I get out.” “Push me, and I’ll fold you in half like a piece of luggage.” “On this door died twenty years of youth, with just an instant ramen for lunch.” “Dear sir sitting in the pregnant women-first seat, how many months are you? I don’t think that’s a baby in there.” [TWITTER CAPTURE, YOON SO-YEON]

Poetry can be found in almost every subway station in Seoul. Poems are posted on the glass that stands between the platform and the tracks at 299 out of the 355 stations in the capital region. The Seoul Metropolitan Government has been printing the poems across lines 1 through 9 since 2008. Contrary to the city government’s initial goal to “give momentary comfort to citizens who are chased by their busy lives,” the poems brought about mixed reactions from citizens and professional poets from the beginning.

A poem named “Magnolia Brassiere” by Bok Hyo-geun, a professional poet, was criticized for sexually depicting his maturing daughter’s breasts in 2012 and taken down on June of that year. [INSTAGRAM]

While many complained that the poems were too difficult to understand, poets criticized the lack of skill in poems wrote by citizens.

The discord between the two opposing views was sparked in 2012 by a poem called “Magnolia Brassiere” by poet Bok hyo-geun. The poem read: “Magnolia magnolia/ So pretty/ Can’t/ Be compared to the blossoming magnolia/ On Seon-hye’s breasts/ That girl/ Freaks out that I may see/ But when I see your brassiere hanging on the clothing line/ I know everything/ Like two blossoms of magnolia/ Shining/ White/ That…”

It turned out that Seon-hye was not the narrator’s secret lover, but actually the poet’s daughter. When an internet user first posted about the lines being too “sexual and alluding to incest” in early 2012, others followed and the poem was taken down. A similar round of controversy hit social media this January around a poem by a civilian named Jeon Jin-wook called “Zoom-in.” While the poem was written in the perspective of a father who received a photograph of his maturing daughter on his smartphone, the last five lines of the poem read, “At least once a day/ I make my way around the maze of the phone/ and pull her closer in/ between my thumb and index finger/ spreading her legs as far as possible.” The poem was taken down within a month.

“I don’t read the poems, even though I take the subway everyday,” said Eom Dong-seob, a 24-year-old student at Korea University. “I see the letters on the screen, but they just seem pointless and the poems are really long and boring so I just stopped looking altogether. I think some of the poets are just crazy.” 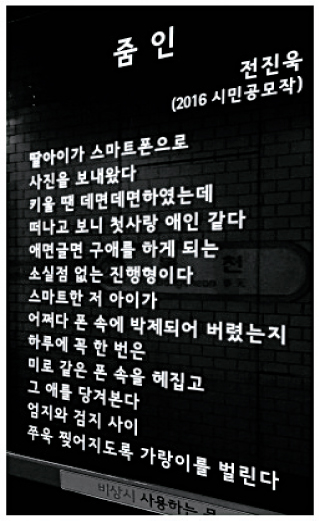 A poem by Jeon Jin-wook was taken down in January for describing a father-daughter relationship in an overly sexual manner. [INSTAGRAM]

One of the many reasons the glass barriers in subway stations were installed in 2004 was to prevent people jumping off the platforms to commit suicide. The Seoul Metropolitan Government began posting poems on the glass in 2008 to cover the somewhat gloomy doors. The poems became even more abundant when the city government held a competition among citizens to write their own poems to post on the walls in 2011.

The first poems to adorn the glass doors, edited or shortened versions of works by well-known poets, such as “The Road Not Taken” by Robert Frost and “I Ask You” by Ahn Do-hyun, caused no issues among subway riders.

At first, people felt comforted by the poems, which touched on a variety of subjects. Then the Seoul Metropolitan Government decided to spice up the roster of the poets and include both contemporary poets and ordinary citizens of Korea.

Over time, the posted works were attacked from both in and outside the literary community. While citizens were angry that the poems were either too difficult or too sexual, professional poets, on the other hand, had a lot to say about the sub-par level of poems written by untrained writers. 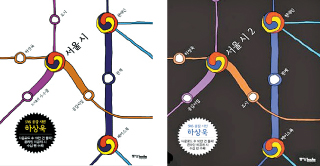 The “Seoul-si” books by poet Ha Sang-wook, who gained popularity on social media for his short and witty lines ? the first book, white cover, was published in 2012, and the second in 2013. [INTERNET CAPTURE]

In July, after the Seoul Metropolitan Government put up a notice for another round of poems to be posted on the doors starting this October, citizens took to social media to express their ideas of what good poems are.

Short satirical verses about rude behavior were the most popular, such as:

“Dear sir sitting on the pregnant first seat, how many months are you? I don’t think that’s a baby in there.”

“I know it’s funny but stop looking at my phone.”

“The door opens and you come in. Come in after I get off, jerk.”

However, poems are not about being understood at first sight or giving a moral lesson, according to poet Kim Keun, who is also a member of the board of the Writers Associations of Korea. “A common misunderstanding is that the poetic world should reflect reality. The poetic world isn’t a representation of the real world, but rather a poem is supposed to make familiar things unfamiliar and give a new perspective on the everyday things people come across,” said Kim.

“People think vague poems are unintelligible, but vagueness is the poetic language. Poems aren’t supposed to instantly stimulate the readers’ feelings. Yes, readers are free to write their own satirical pieces, but a line needs to be drawn between real literature. What they’re doing is more like coming up with witty proverbs. Poems should not be restricted to the rules of the real world.”

The city’s judging criteria for this autumn’s batch of poems specified that the poems should be hopeful, touching, and related to love and courage.

Kim added that poems are about giving a different view, not an ordinary look into society. “I understand that subway stations are public spaces, but the city government is suppressing poetic creativity and not taking into consideration actual artistic experiences. They’re just treating the poems as part of their administrative and tourism policies.”

Contrary to the poet’s belief that poetry isn’t about being understood quickly, the literary trend among the younger generation in recent years has been short and easy phrases written in the most concise manner that describe a situation commonly encountered in people’s everyday lives.

Ha Sang-wook, for example, is a poet who gained popularity through posting short and witty messages on social media, helping set fire to the short-form poem fad. In 2012, Ha gathered his popular posts into a book titled “Seoul-si” - a word meaning both “Seoul city” and “Seoul poem” - and has also made songs and appeared on television. Some of his earliest and most famous lines include:

“I thought of something good, you.”

“You make me regret my hot days, gas bill.”

“Where does your potential end, my toothpaste?”

“I used to wish for something to happen, now I wish that nothing happens.”

After Ha, others followed to create their own short verses that were easily understood by internet users and book readers alike. Nowadays, popular poems are no more than a few lines long, using easy vocabulary without any metaphors and usually about things that commonly happen between lovers or at the workplace. Added with an appropriate picture, the poems make excellent memes and often are quite popular on social media.

Jeong Myeong-kyo, a literary critic and also a Korean literature professor at Yonsei University, explained. “It’s true that literature should be enjoyed by readers, but the so-called poems these days are nothing more than playing with words. Korean people were indifferent to poems until a couple of years ago, but the way it’s being consumed these days lacks poetic value or dignity.”

“Korean people are notorious for not reading books, so it’s obvious that the psychological distance between poets and book readers is so far apart. The [Seoul Metropolitan] government needs to take this into consideration and come up with strategies for people to properly appreciate the poems,” said Jeong.

“For instance, the poems should be posted for a shorter amount of time so that people don’t get bored, and the government should start with easier and more well-known poems from the past to get people used to it. They could also have events like poem readings and competitions people could take more active part in,” said Jeong. “The important thing is to help citizens get used to digesting a poem in its whole and to heighten their abilities to enjoy poems, so that the overall sensitivity towards literature goes up.”

The application period for this year’s poems ended on Aug. 12, with 2,178 poems submitted in total. While the Seoul Metropolitan Government initially planned to choose 100 poems for this autumn, the large number of submitted poems left the final number of poems undecided.

“We may choose more than 100 poems if they’re good, and less than 100 if they’re bad,” said an official from the Seoul Metropolitan Government. Referring to the controversy surrounding Bok’s poem in 2012, the official explained that, “We respect the artistic values of a poem, but we have to respect the public aspects of the space as well. We’re working on improving the screen door poems, but there are restrictions, like budgets.”