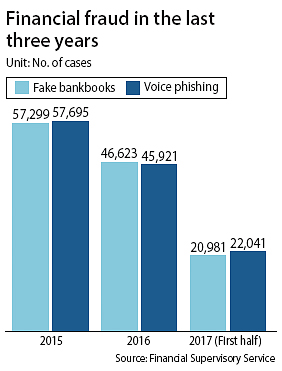 Criminals have had to get inventive in their attempts to scam people into giving them money, including using virtual currencies like bitcoin, following a government crackdown on financial fraud.

Traditionally, financial scams have mostly been through fake bankbooks or voice phishing from telephone calls.

According to data from the Financial Supervisory Service on Sunday, 3,497 incidents of fake bankbooks have been reported per month during the first half of this year. The number of reported cases has been on a gradual decline since 2015 as banks have been fighting against possible scams by tightening the rules when issuing new bankbooks.

As it became difficult for scammers to secure fake bankbooks, they started taking money through virtual currencies like bitcoin. The scammers demand victims purchase bitcoin prepaid cards, explaining that the victim needs to use the bitcoins to pay the commission on a loan.

Prepaid bitcoin cards are available at some convenient stores so people can more easily use the currency.

“In the past there were scammers exchanging vouchers into cash but as that method became widely known, scammers are coming up with relatively unfamiliar ways, such as bitcoin, to get cash,” said Kim Bum-soo, leader of the financial fraud response team at the Financial Supervisory Service.

The number of voice phishing cases during the first half of this year declined by 8.1 percent compared to last year. This was largely thanks to a government campaign to raise awareness about voice phishing scams that impersonated government officials.

However, voice phishing scams that claim to offer favorable loan options are on the rise. The scammers tricked people by telling them that they will turn the loan into a low interest-rate loan offered by a government-supported fund. Last year the number of reported cases rose to an average 112 per month, but in the first half of this year that has increased to 123 cases.

For this type of voice phishing, scammers use an automated call system that allows them to call thousands of numbers at once to increase their chances of finding a potential victim. Since the scheme appears to be similar to the sales method frequently used by real loan service operators, many victims cannot tell that the call is a trick.

The loan-related scams have also become more expensive. While in the past scammers would ask victims to pay commission on an existing loan or to pay off the interest, they are now asking victims to transfer a lump sum payment for the loan to enable it to be moved to a fictional government-backed program that supposedly has a lower interest rate.

To further reduce financial fraud, the financial watchdog is planning to add a question for customers transferring money online or at an automated teller machine next month. The question asks customers whether they were asked to withdraw or transfer money by a government official or if they are doing so for a loan.