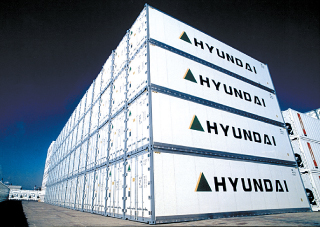 Hyundai Merchant Marine is trialing the use of Internet of Things (IoT) technology to its refrigerating containers to better monitor freshness of temperature-sensitive products during delivery, the company said Sunday.

The shipping company will start testing the service on 10 of its refrigerating containers from today through October and decide whether to expand the IoT-based monitoring to all of its freezing containers based on big data analysis of the test-run results. The company will be assessing whether the service cuts operational costs and improves the quality of the refrigerating service.

Without IoT sensors, the ship’s crew has to monitor the temperature of refrigerating containers every 12 hours and report the results to cargo owners. IoT technology is expected to make that process a lot faster and more convenient as the shipping company can monitor and control temperatures in containers via computers in real-time, assuming the ship has an internet connection.

“As it is most important for refrigerating containers to maintain a certain temperature while passing through hot or cold regions on the way to the final destination, the application of IoT technology will upgrade the quality of our logistics service,” a spokesperson from Hyundai Merchant Marine said.

As the company has already been participating in a local consortium comprised of IT service companies and government organizations to discuss applying blockchain technology to shipping and logistics, the application of IoT could help offer a more effective and digitized service to customers, the company noted in a press release Sunday.

The consortium established in June consists of IT service companies such as Samsung SDS and IBM Korea as well as the Korea Customs Service and Ministry of Oceans and Fisheries.

Blockchain is a technology that verifies and encrypts transactions to store them in distributed ledgers. It is best known for its application to digital currencies such as Bitcoin. The system ensures transparency and security of digital documents while slashing costs of storage as it does not require expensive servers.

While data related to logistics is currently recorded and saved in central databases, blockchain technology would allow everything from production to storage and shipping to be recorded in detail, allowing all companies involved in fulfillment chain to access shared information in real time.