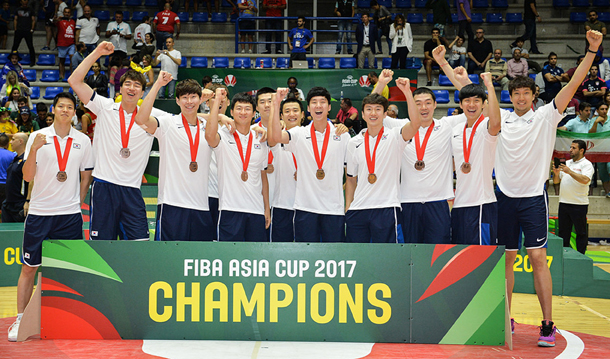 The Korean men’s basketball team, ranked 31st in the world, defeated New Zealand, ranked 20th, 80-71 to win a bronze medal at the 2017 FIBA Asia Cup in Beirut, Lebanon, on Sunday.

Korea was down 5-13 during the first quarter, but Hur Woong successfully scored three three-pointers, allowing the team to take the lead 25-17. Choi Joon-yong helped maintain it, but during the fourth quarter, New Zealand made consecutive baskets, bringing the score to 69-64.

But thanks to Kim Sung-hyung’s lay-ups and Jeon Jun-bum’s three-point shots, Korea once again extended their lead.

Korea, who already defeated New Zealand in the qualification game 76-75, once again showed their dominance.

Hur Woong led the team with 20 points, followed by Oh Se-keun and Choi, who each scored 14. Throughout the game, Oh averaged 16 points with 5.7 rebounds and was named part of the All-Star Five with Hamed Haddadi of Iran, Fadi El Khatib of Lebanon, Mohammad Jamshidi of Iran and Shea Ili of New Zealand.

Though the team, led by Hur Jae, failed to advance to the finals by losing 81-87 to Iran on Saturday, it was the first time in four years that Korea has won a bronze medal. This marks a great improvement, compared to their sixth-place finish at the 2015 Asian Championship.

In the Asia Cup, Korea had a shaky start, losing to Lebanon, but then defeated Kazakhstan and New Zealand in the group round. Korea also defeated Japan to advance to the quarterfinals and defeated the Philippines 118-36 in the quarterfinals.

Korea’s victory over the Philippines received attention, as they scored so many points that it resembled an NBA game. Korea successfully made 16 of its 21 attempted three-point shots, showing a higher success rate than with its two-point shots.

They also had to play without their star players, Cho Sung-min, Moon Tae-jong and Moon Tae-young -- and were also missing Kim Joo-sung and Yang Dong-geun. But Lee Jung-hyun, Jun and Hur all played above expectation.

Upon completion of the game against New Zealand, Korea’s average score was 88.3 points and its three-point shot success rate was 41.7 percent, which is second among the 16 participating countries, after Australia, and tenth in the world.

Now the team faces the Asian qualifier for the 2019 FIBA Basketball World Cup, starting in November.

Starting with the 2019 World Cup, FIBA has changed to playing home-and-away within its groups. So until July, Korea will have to play one home and away game with the teams assigned in Group A: China, New Zealand and Hong Kong.

Among those, China is considered a weaker team, as they’ve been eliminated in the quarterfinals by losing to Australia.

Having now defeated New Zealand twice, Korea may have a chance at advancing to the World Cup for the second consecutive time.