Lee Seung-yeop of the Samsung Lions is not the only Korea Baseball Organization (KBO) veteran nearing the end of their final season. 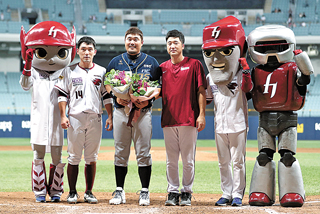 Lee Ho-jun of the NC Dinos, in navy, poses for a picture before the game against the Nexen Heroes on Sunday. [YONHAP]

Lee Ho-jun of the NC Dinos, who made his debut a year earlier than Samsung’s Lion King, is also approaching the end of his final season as a player.

Just like Lee Seung-yuop, Lee Ho-hun announced his retirement at the beginning of the season. But unlike Lee Seung-yeop, the KBO did not offer to put on a special retirement tour for Lee Ho-jun. Despite this, other KBO teams stepped up to the plate to offer a series of special events commemorating Lee’s career.

Before the Dinos’ game against the Kia Tigers on Aug. 16 started, Kim Ki-tae, manager of the Tigers, presented a flower bouquet to Lee and on the electronic scoreboard, it said, “First and last game of Lee Ho-jun in Gwangju, we wish him the best in his second life after retirement.” 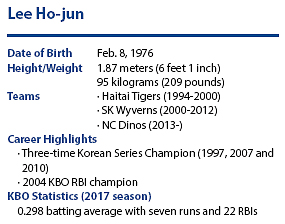 Lee joined the Haitai Tigers after graduating from Gwangju Jeil High School and considers the Tigers to be his home team.

Ten minutes before the start of the game against the SK Wyverns on Aug. 9, the team played a short video commemorated Lee’s time playing in Incheon.

“I’m just thankful for the event because I didn’t know about it at all,” Lee said through his farewell speech. “Through the ten years at Munhak Baseball Stadium, I’m thankful for the great memories.”

The teams that weren’t related to Lee also celebrated his retirement. When Lee played his last game in Jamsil against the Doosan Bears on Aug. 13, players from both teams stood in a line and presented a flower bouquet. During the game against the Nexen Heores on Sunday, the Heroes also celebrated Lee’s last game at Gocheok Sky Dome and Lee hit his fourth home run of the season during the game.

Though Lee Ho-jun is a veteran player with a great career behind him, he hasn’t spent much time in the spotlight. The glittering career of Samsung’s Lee Seung-yeop has overshadowed Lee Ho-jun throughout his time in the KBO.

Lee has refused to head toward retirement quietly, nearing the end of his final season with a 0.298 batting average with seven runs, 22 RBIs and four home runs in 49 games.