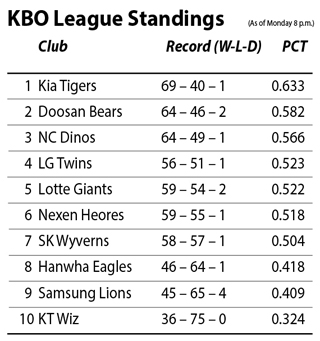 While the Doosan Bears have made an impressive return to form in the second half of the season, the more unexpected comeback came from the Lotte Giants. Since July 17, the Giants have the second highest winning percentage in the Korea Baseball Organization at 0.759, with 18 wins, one tie and ten losses.

With the Giants vying for a spot in the postseason for the first time in five years, they head into a week that could change the standings at the top of the league. Starting today the Giants will face the Kia Tigers, the top-ranked team, in Gwangju. On Thursday they will return to Busan for a two-game series against the LG Twins, ranked fourth, before facing the Nexen Heroes, ranked sixth, over the weekend.

As the Giants are only 0.5 games ahead of the Heroes and tied with the Twins, it is likely that this week will impact the postseason lineup. The Giants had their best week of the season last week, winning a two-game series against the Bears and the Heroes.

Though they lost one game against the Hanwha Eagles over the weekend, the Giants quickly responded with a win on Sunday by scoring three runs in the last two innings. The Giants’ record of five wins and one loss last week has put them into contention for the fifth spot in the KBO.

While two games got cancelled due to heavy rain on Sunday, the Bears’ game against KT Wiz continued in Suwon. Despite the Bears winning comfortably on Saturday, the Wiz took the Sunday game 2-1 after a 30 minute rain delay. With that, the Wiz, the bottom ranked team, ended their four game losing streak.

At the Gocheok Sky Dome, the NC Dinos defeated the Heroes 4-3, getting themselves out of a two game losing streak. The Dinos got off to a great start in the first, with home runs from Lee Ho-jun and Na Sung-bum. They maintained their lead for a win.

Behind the success of the Giants, there is Son Seung-lak, who has picked up 13 saves in the second half of the season. During the games on Aug. 15 and 16, Son picked up two consecutive saves against the Doosan Bears. 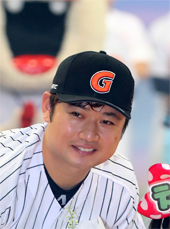 Prior to Son’s career with the Giants, he made his KBO debut with the Hyundai Unicorns after graduating Yeungnam University in 2001. Despite high expectations, Son concluded his rookie season, playing full-time as the Unicorns’ starting pitcher, recording five wins and ten losses with a 5.43 ERA.

Once he returned to the KBO after his military service, Son joined the Nexen Heroes as a closer. While playing for the Heroes he topped the KBO for saves in 2010, 2013 and 2014.

In the 2017 season so far, Son has picked up 28 saves with one win and three losses, recording an ERA of 2.32. With that, he is currently ranked first for saves once again. When Son first joined the Giants toward the end of 2015, signing a four-year contract as a free agent for 6 billion won ($5.26 million), he showed instability in his pitching, recording seven wins, three losses and 20 saves with a 4.26 ERA. Son was shaky at the start of the season, but starting in May, he began to show better control in his pitching.

Currently, Son is ranked fourth in the KBO’s career saves at 226. It is very likely that he will exceed Kim Yong-soo of the LG Twins’ record, 227.

“Closers should not be afraid of the team’s loss or criticisms,” Son said. “They need to be aggressive and it’s important for them to forget about bad memories quickly.”