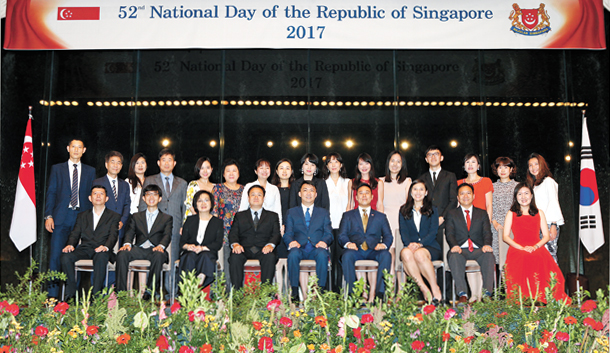 The 52nd National Day of the Republic of Singapore was celebrated under the theme of “#OneNationTogether” on Aug. 18 at the Grand Hyatt in central Seoul. [PARK SANG-MOON]

Her Excellency Kim Hyun Mee, colleagues from the Diplomatic Corps, ladies and gentlemen,

A very good evening to all of you.

On August 9 every year, many people in Singapore usually gather together with their families to watch the National Day Parade, fireworks and have a party. But for those of us far away from home and our families, we instead invite our friends to celebrate this day with us. As you say here in Korea, “A close neighbor is better than a distant cousin.” So I would like to thank all of you for joining us at this reception tonight to mark the 52nd anniversary of Singapore’s independence.

In particular, I would like to express my appreciation to a few old friends of Singapore for being here. They are National Assembly Member Lee Un-Ju and former Foreign Ministers Yun Byung-se and Yu Myung-hwan, who have all previously lived or worked in Singapore for a few years. 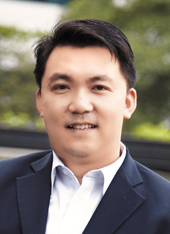 The theme for this year’s Singapore National Day celebration is “#OneNationTogether”.

This is represented by the logo of four interlocking arms with the image of Singapore in the middle, symbolising our strength in social unity and multicultural harmony. #OneNationTogether is a rallying call for Singaporeans to harness our diversity to overcome challenges as one people and one nation regardless of our origin and background.

Indeed, for the greater part of last year we had to weather the challenges of a subdued global economy that had been weighed down by weak demand and political discontent. The good news is that since the end of last year, Singapore has returned to more robust economic growth.

We are cautiously optimistic that this momentum will carry through for the rest of the year in the same way that we are seeing a steady recovery in our bilateral trade with Korea. Singapore investments into Korea remains healthy. We retained our position as the third largest foreign investor in Korea in 2016.

At the same time, we also welcome the continued participation of Korean companies in Singapore’s development. One such example is the 370 billion won ($325 million) deal which LS Cable & System won earlier this year to supply underground high-voltage cables for a project in Singapore.

In terms of high-level political exchanges, we were happy to host the visits of Speaker of the National Assembly Chung Sye-kyun and then-Minister of Trade, Industry and Energy Joo Hyung-hwan earlier this year. Last month, my Second Minister for Foreign Affairs Josephine Teo made a working visit to Korea. Over the next few months, a few other Singapore ministers are expected to travel to Korea for either bilateral visits or to attend regional and multilateral meetings.

Just two weeks ago, Foreign Minister Kang Kyung-wha was in the Philippines to attend the Asean Ministers Meeting and to mark the 50th anniversary of Asean’s establishment on Aug. 8.

Aug. 8 is coincidentally also the anniversary of Singapore’s diplomatic relations with Korea.

As an Asean member state, Singapore welcomes President Moon Jae-in’s desire to elevate the Asean-Korea partnership. We look forward to hearing more details on how this vision will be realized.

For Singapore, Asean-Korea cooperation is an integral part of our bilateral cooperation with Korea. We are ready to expand and deepen this partnership particularly in areas such as sustainable development, innovation, nurturing small & medium-sized enterprises and harnessing the opportunities of the fourth industrial revolution.

Finally, I am happy to inform you that as in previous years we have worked with the hotel to include some well-known Singapore food such as Hainanese chicken rice and bak-kut-teh in tonight’s menu.

Our appreciation also goes to Singapore brands such as Bee Cheng Hiang, Crystal Jade, Gryphon Tea, Owl Coffee and SingKee for supporting this reception. Please try out what they have to offer at the back of this ballroom.

Enjoy yourselves and have a pleasant evening. Thank you.