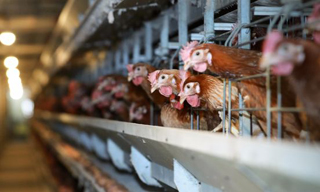 The chickens in the yard liked the dirt. They would dig up the soil and spread it over their bodies. They would shake off the dirt from their wings and then do it again. The yard is dug up here and there.

In fact, the chickens were bathing themselves with the soil to get rid of ticks and mites. As the sun set, it was my job to chase the chickens back to the cage. Then, the hens rub their beaks onto each others’ feathers. The roosters enviously gazed at the hens.

The hens laid fresh eggs. It was so fun to get the eggs from the nest. For Teacher’s Appreciation Day or a school picnic, kids liked to present the teachers with eggs. The country hens gradually disappeared as large-scale poultry farms increased. When I was a high school student, my family no longer kept chickens in the yard. It became a nostalgic memory that children would steal chickens from neighbors.

Mites on chickens are vampires. They are less than 1 mm (.04 inches) long, but they stick to the feather and skin and suck blood. Research shows that a mite can consume up to 5 percent of a chicken’s blood. They also reproduce fast. In two months, they multiply 10,000 times.

In the past, chickens killed the mites with natural baths. However, chickens today are helpless, as they are stuck in battery cages smaller than the size of an A4 sheet of paper. They cannot even spread and shake their wings. They are suffering from the mites’ attacks.

A few years ago, I visited a friend’s poultry farm. My eyes were teary, and the odor was potent. “Chickens cannot survive without pesticides.” Instead of natural baths, pesticides were widely used.

It is tragic that the chickens are going through a series of ordeals in the year of the rooster. 30 million chickens were buried because of avian flu, and now pesticides have been found on eggs. It is a disaster courted by bureaucracy.

The civil servants who have never been near a cage neglected pesticide use for a long time, and the Ministry of Food and Drug Safety turned out to be incompetent, ignorant and irresponsible. The catastrophe is a result of letting dim-witted officials handle what’s on people’s dinner table.

Chickens are crying out for their right to bathe like their ancestors. Korean people’s happiness index is one of the lowest in the world, and the chickens are just as unhappy.

The civil servants at the Ministry of Agriculture, Food and Rural Affairs and the Ministry of Food and Drug Safety should get up from their desks and come see the chicken cages. Without improving the cage condition, it is hard to get healthy chickens and fresh eggs. Let’s save our faces for the chickens.