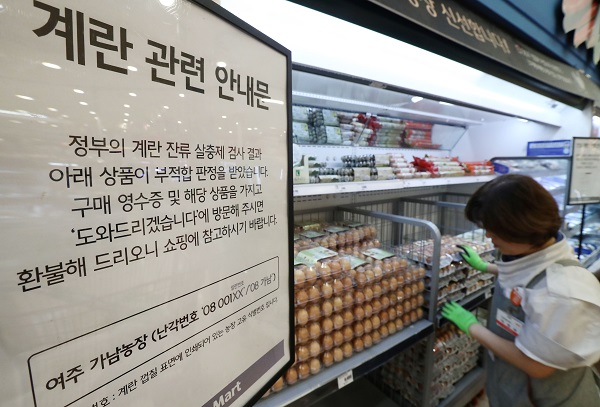 A sign hanging at a large discount chain located in Seoul says that shoppers can receive refunds on eggs that they purchased are found to be the ones that failed the government-run safety inspections. [YONHAP]

The government confirmed on Monday that eggs from two environmentally friendly farms in North Gyeongsang contained dichlorodiphenyltrichloroethane (DDT), causing concern after it announced last week the final inspection results on every farm in the country.

DDT was a once widely used pesticide that is now banned in most countries, including Korea starting in 1979, because it is a highly toxic substance that can cause various diseases.

It was found that the government did not disclose information about eggs containing DDT when it announced its inspection of all 1,239 chicken farms in the country on Friday, when Minister of Agriculture Kim Young-rok said, “all eggs distributed starting Friday are safe and people can trust the inspections, which followed scientific procedures.”

A local media outlet reported over the weekend that eggs from two farms contained DDT, but that the government did not disclose this. The Agriculture Ministry confirmed that it is aware of the case on Monday, but the ministry said the eggs only contained very small amounts of DDT, and are unlikely to cause any harm.

One farmer at a farm where contaminated eggs were found said in an interview with local media outlet that he did not use DDT and cannot buy it anywhere. The farmer added that he does not agree with the government’s findings and that he will request additional inspections.

G0overnment officials explained that eggs might have some DDT on them even though farmers did not use it as the substance can remain in the ground for a long period of time. The government on Monday found three more farms producing eggs with excessive levels of a pesticide called flufenoxuron after additional investigations of the 420 egg farms that did not meet the full requirement of the first inspection procedures.

This pesticide is not allowed on Korean chicken farms, meaning the total number of farms with excessive pesticides rose to 51 as of Monday.

The additional inspection came after many questioned the government’s inspection procedures. Officials collected about 20 egg samples, but it was later found that some farmers provided samples instead of government workers collecting them themselves.

Among the 49 contaminated farms that were found as of Friday, 59 percent received Hazard Analysis Critical Control Point certifications by the government, which means that they passed government-run food safety tests.

It was also found that 87 chicken farms did not receive the annual educational program run by the government, which deals with the health of livestock.

According to the opposition Bareun Party’s lawmaker, Hong Chul-ho, on Friday, only 12.8 percent of the 1,456 layer chicken farms finished the educational program last year. The Agriculture Ministry said it had to cancel the program due to the outbreak of avian influenza late last year.

The Ministry of Food and Drug Safety announced on Monday that people will not face health risks even though they may have eaten eggs containing excessive amounts of pesticides. The ministry said it has reviewed 1,617 retailers who distributed eggs from 49 farms that contained pesticides and came to this conclusion.

The ministry studied safety results for fipronil, bifenthrin, etoxazole, flufenoxuron and pyridaben, and added that people would face no health issues if they were to eat 2.6 contaminated eggs each day for the rest of their lives. On average, Koreans consume 0.46 eggs per day.

Meanwhile, President Moon Jae-in apologized on Monday for causing concern due to the egg scandal and said he will work on improving the government’s crisis management structure.

“I apologize for causing concern due to the egg scandal,” said Moon. “The safety of food is directly related to people’s health and I request [all government branches] to work on gaining the people’s trust once again by announcing the progress of the issue thoroughly and improving the inspection procedures.”

In addition, regional governments like Gyeonggi and North Chungcheong announced plans to prevent similar crises from occurring in the future by improving safety standards for managing farms and livestock.

As a result of the scandal, egg sales at large discount chains are currently going down. Many retailers are hanging signs saying all their eggs have passed the government safety check, but many consumers are still hesitant.

Large chains suspended egg sales on Tuesday after the news broke and resumed sales later last week. Lotte Mart said it sold between 400,000 and 500,000 eggs per day up until Aug. 14, but that since resuming sales, figures have dropped 45 percent. Emart and Homeplus also announced that their eggs sales fell nearly 45 percent compared to the previous week.

It has been about 10 months since the country faced the outbreak of the avian influenza virus last year. In January, the cost of eggs rose by 200 percent compared to November, when the virus started to spread. This was affected by the government’s decision to get rid of 25 million layer chickens, or 36 percent of the total.

This led to a fall in the number of eggs available in the country, and government efforts to stabilize the market by importing eggs from countries like the United States.

At the time, the problem was a shortage of eggs in the country, but now the problem is that people are not buying eggs even though there are plenty of them.

“I don’t know why we have to face issues with eggs again after recently going through the AI scandal,” said a housewife in her 30s. “The government’s announcement changes so often and I don’t know if I can trust the safety of eggs even though the government says they all passed inspection, since they just can change their previous inspection results.”

Lee Sang-mok, a director at the Korea Poultry Association, said the government should come up with preventive policies that will oversee how chickens are raised and how eggs are distributed, instead of focusing on solving problems after they occur.