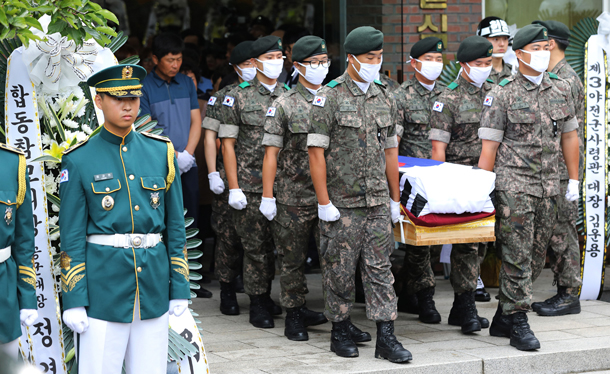 The fire inside a K-9 Thunder last week that killed two soldiers and injured five during an artillery drill in Cheorwon County, Gangwon, appears to have been caused by a breechblock that malfunctioned for an unknown reason, which then led to propellant catching fire, according to the Korean Army on Monday.

The accident took place at 3:19 p.m. on Friday at an Army firing range just south of the inter-Korean border in Cheorwon, where 10 K-9 howitzers were deployed for a training exercise. All seven soldiers affected by the blaze were inside one of the vehicles.

Without explaining why, an Army official said Monday that smoke rose from the breechblock, a piece of metal on a breech-loading firearm that is drawn back to insert a cartridge, inside the self-propelled howitzer after soldiers loaded the weapon last Friday.

Three charges blew up, leading to a blaze inside the K-9 howitzer, after which the shell was discharged.

Army officials downplayed any possibility it was a man-made disaster, saying the focus of their investigation was on mechanical flaws.

A joint funeral was held for the two soldiers Monday morning at the Armed Forces Capital Hospital in Seongnam, Gyeonggi.

A 27-year-old sergeant first class was the first to die last Friday on his way to the hospital. A 22-year-old private first class died on Saturday while receiving medical treatment.

Both were posthumously promoted. On Monday afternoon, they were laid to rest at the Daejeon National Cemetery.

One thousand K-9 howitzers are deployed by the Korean military, mostly stationed in the northernmost areas facing North Korea, including on the islands of Yeonpyeong and Baengnyeong in the Yellow Sea.

But the vehicles, manufactured by Samsung Group’s Samsung Techwin before the company was taken over by Hanwha Group in 2014 and renamed Hanwha Techwin, have had a checkered history since being first developed in 1999.

When North Korea shelled Yeonpyeong Island in 2010, claiming the lives of two soldiers and two civilians, the South tried to counterattack by using six K-9 howitzers, but two did not work.

A parliamentary audit last year revealed that 1,708 flaws were found in domestic howitzers over the past five years.

The latest accident is also expected to undermine the country’s lucrative exports of K-9 howitzers, which have been sold to countries such as Turkey and Poland. Earlier this year, Hanwha Techwin signed deals with Finland and India.

President Moon Jae-in and Defense Minister Song Young-moo expressed their condolences to the victims’ families and assured that the surviving soldiers will receive the “highest level of respect” in medical treatment and compensation.