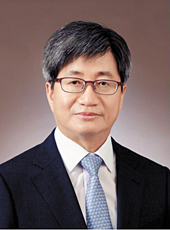 President Moon Jae-in on Monday tapped Kim Meong-su, head of the Chuncheon District Court, as the next chief Supreme Court justice, underscoring the president’s resolve to reform the judicial branch.

“Always taking human rights as his mission as a judge, he has strived to look after the powerless,” said Park Soo-hyun, the Blue House spokesman, during a press briefing at the Blue House. Park added that the nominee led efforts within the judicial branch in making the judicial administrative process more “democratic,” saying he was the “right person” to serve the public and further expand public trust in the institution.

Kim, a native of Busan and law graduate of Seoul National University who is known for his liberal legal perspective, served as the first president of a legal study group comprised of judges with liberal views, named the International Human Rights Study Group. He held various posts in Seoul courts, including Seoul High Court and Seoul Central District Court, before taking the helm of the Chuncheon District Court in Gangwon.

Nominated by the president, a Supreme Court chief justice nominee must undergo a parliamentary hearing and requires parliamentary approval before officially leading the country’s highest court. Once formally appointed, a Supreme Court chief justice can only serve one six-year term. Outgoing chief justice Yang was appointed by former President Lee Myung-bak and has recently been embroiled in a controversy involving allegations that he tried to clamp down on activities of judges belonging to a liberal-leaning study group.

Once appointed, Kim will have vast power across the judicial branch, with appointment authority for judges and judiciary officials. He will also have the ability to nominate Supreme Court justices as well as senior members of the National Election Commission.

And since six of the Supreme Court’s 13 members, comprising 12 justices and one chief justice, are due to step down next year, Kim will be able to name new incoming justices should he be approved, taking the highest court increasingly to the left in a departure from the past six years under Yang’s leadership.

Asked whether Moon’s appointment reflected the president’s determination to reform the judicial branch, a senior Blue House official said, “You can interpret it that way,” adding that pursing reform measures was the administration’s “fundamental mission.”