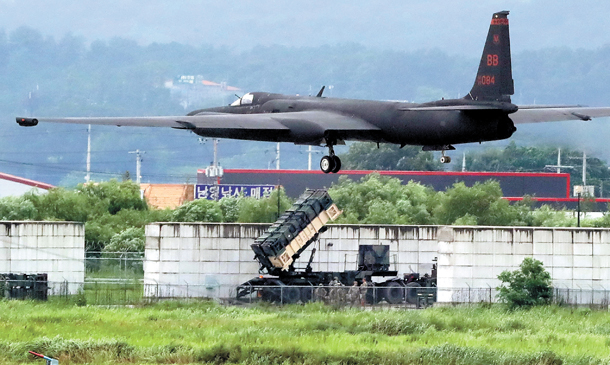 A U-2 High-Altitude Reconnaissance Aircraft takes off from Osan Air Base in Pyeongtaek, Gyeonggi, as the Ulchi Freedom Guardian exercise began on Monday. A Patriot missile launcher is seen beneath the U-2 aircraft. [YONHAP]

In an opening remark at a cabinet meeting to mark the first day of the joint Ulchi Freedom Guardian (UFG) exercise, the president emphasized that the North’s provocations in protest of the joint drills only “lead to another round of joint military action.”

He reiterated his demand that Pyongyang stop its provocations, while calling the annual drill “defensive in nature,” refuting Pyongyang’s criticism that the annual drill is in fact aimed at training joint forces to topple its regime.

Operation Plan 5015, created by the South and the United States in 2015, is reportedly used in the exercise, and includes a preemptive strike against the North’s nuclear and missile installations as well as the removal of the regime’s leadership.

President Moon Jae-in salutes the national flag on Monday at a cabinet meeting inside the Blue House on the first day of the Ulchi Freedom Guardian joint exercises. [YONHAP]

“The North should not distort our efforts to safeguard peace in the region,” he said, “and should not use the drill as an excuse to aggravate tensions with new provocations.”

Moon’s remark came as the forces of the two allies kicked off the UFG exercise, which will run through Aug. 31, mobilizing around 50,000 troops from the South Korean side and 17,500 U.S. troops, including 3,000 overseas reinforcements.

Moon noted that if Pyongyang makes “a bold decision” to halt its nuclear and missile programs, military tensions on the peninsula will ease and the two Koreas could work together with the international community to “bring about stability and prosperity,” something he has repeatedly said since taking office on May 10.

The North called the drill a “reckless nuclear war exercise” against the North, which it said was “driving the situation into the uncontrollable phase of a nuclear war,” in a commentary carried by the state mouthpiece, Rodong Sinmun.

The downgrade led some to speculate Washington is sending a signal to Pyongyang of its wish to calm the tensions from earlier this month, when President Donald Trump warned he would visit “fire and fury” upon the North, and the North threatened to fire four missiles in waters near Guam, home to major U.S. military bases.

But after the North said it would hold off on the missile launch against Guam and instead wait to see the United States’s next move, Trump lauded North Korea leader Kim Jong-un, saying he “made a very wise and well reasoned decision.”

He added, “The alternative would have been both catastrophic and unacceptable!”

“The numbers are by design to achieve the exercise objectives and you always pick what you want to emphasize,” he was quoted as saying by Reuters Monday.

“Right now there is a heavy emphasis on command post operations, so the integration of all the different efforts.”