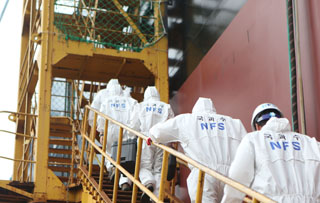 Investigators from the National Foresic Service enter the vessel Monday to probe the cause of an explosion inside a tank, which was built by STX Offshore and Shipbuilding Company, in Jinhae District, Changwon, South Gyeongsang. [YONHAP]

The detonation inside a tank in a ship at Changwon, South Gyeongsang, on Sunday that killed four workers may have been caused by an electrical spark, authorities said Monday.

Four workers were painting inside one of the 15 tanks of a vessel being built by STX Offshore and Shipbuilding Company in Jinhae District, Changwon, when an explosion took place inside the tank around 11:37 a.m. Sunday, killing them.

“We think the main cause was electricity,” said Kim Tae-gyun, a marine police officer in charge of the investigation.

“In our first inspection, we found that the electric cord sheath of some personal light devices was torn, and one larger light device was broken,” he said.

“We have yet to confirm if an electrical spark, in combination with combustible gas in the air, could have led to the explosion.”

At the time of explosion, the tank was likely filled with gas from the fresh paint.

“There was no grinder or welding work inside the tank at the time, because that work had already been finished by the time the workers went inside to paint,” said Kim Young-min, director of safety department of STX Offshore and Shipbuilding Company. “The company has not yet determined the source of ignition.”

Authorities said it may take up to a week before further inspection results are out, because the tank was partially destroyed.

In addition to the cause, authorities are also investigating whether STX Offshore and Shipbuilding Company violated any safety regulations.

“Workers are granted permits to work in an enclosed space only after the company has confirmed there are no risks,” said an official of the Ministry of Employment and Labor’s Changwon branch office. “We’re going to check if it skipped any such procedures.”

“A company safety check official granted the permit to the workers after checking the level of oxygen and other conditions inside the tank, around 8:35 a.m. Sunday,” said an employee of STX Offshore and Shipbuilding Company.

“The last time I talked to my husband, he said he’ll be back around 4 p.m. after the painting work was done,” said Lim’s 47-year-old wife. “I wish I had taken him with me to my brother’s funeral on Sunday, then he would still be with me.”

The vessel, some 90 percent complete, is to be built into a 74,000-ton oil-products carrier that is to be delivered to a shipping company in Greece in October.