Many of the top batters in the Korea Baseball Organization (KBO) like Choi Hyoung-woo of the Kia Tigers, Kim Jae-hwan of the Doosan Bears and Lee Jung-hoo of the Nexen Heroes have one thing in common: they throw with their right hand but bat with their left. It’s not an exaggeration to say that this is the year of the cross-dominant players - five of the top ten batters this season have adopted this unusual style.

Of the top ten batters in the KBO, five are cross-dominant and in the most hits category, the top five players all use different hands for batting and throwing.

What’s most interesting is that all of the cross-dominant players were originally right-handed. They have consciously trained themselves to bat left-handed, but have continued to throw with their right hand. 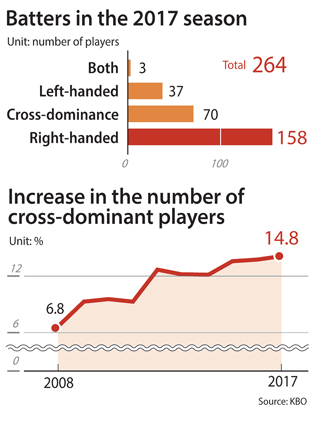 “The cross-dominant players have to work two to three times harder than other players to overcome their weakness of having to use both hands,” said Lee Jong-beom, a former MVP and Rookie of the Year in the KBO. “They are good because they work really hard.”

Around the world, one in every ten people is estimated to be left-handed. In Korea the figure is much lower, with only five percent of the population favoring their left hand.

That said, Lee Jong-beom, who is left-handed, had to learn to play baseball as a right-handed player because there was no equipment for lefties at the time.

“When I started, there wasn’t a baseball glove for lefties,” Lee Jong-beom said. “And all the baseball players I saw on TV were right-handed batters. So I thought you have to play baseball right-handed. Now I regret not being a cross-dominant player.”

In baseball, it is generally true that left-handed batters are at an advantage in the batters box, as their body naturally rotates toward first base as they swing the bat. As Lee Jong-beom was aware of this advantage, despite not being able to take advantage of it in his own career, he encourages his son, Lee Jung-hoo, to be lead with his left hand.

As a result, Lee Jung-hoo’s debut season has been notable for how often he made contact with the ball. As of Monday, Lee’s batting average is at 0.340 with 0.412 on base percentage and 146 hits.

Lee Jung-hoo has well exceeded his father’s debut statistics in the number of hits, at 133, after only 106 games. At Lee’s current pace he is likely to set a new KBO record for the most number of hits by a rookie, currently held by former LG Twins player Seo Young-bin with 157.

“I was well aware of the advantages of being a left-handed batter so I suggested being a cross-dominant player,” Lee Jong-beom said.

Historically, cross-dominant players started to appear in the KBO in the late 1980s. Kim Sang-woo of the Lotte Giants was the first cross-dominant player registered with the league in 1989. Won Won-keun of the Pacific Dolphins, who played from 1988 to 1995, also adopted the style.

“The increase in the number of cross-dominant players may be influenced from the success of Asian players like Ichiro Suzuki and Hideki Matsui in the major league,” said Lee Jong-beom.

In the past, cross-dominant players were considered weak at bat, as there was a limit in weight transfer in their swing. And that may be somewhat true, because until Choi won the KBO home run title in 2011, there was rarely long hitters that were cross-dominant.

In fact, at one point baseball pundits even complained about the rising popularity of cross-dominant players, worrying that the KBO was losing sluggers because they were all concentrating on left-handed batting. This season has proven that the stereotype is outdated, as left-handed batters now dominate the top of the home run rankings.