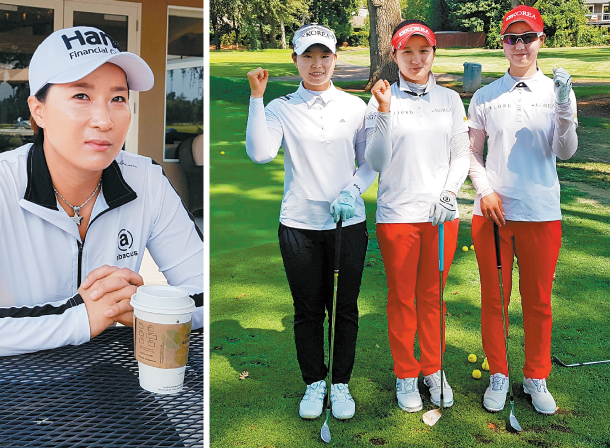 Pak Se-ri, left, during an interview at Butte Creek Country Club in Chico, California, on Monday. The three members, right, on the Korean national team will play this weekend without going through qualification. [YONHAP]

Retired Korean golf legend Pak Se-ri is hosting a U.S. junior tournament for the first time this week in California, and it’s an event she’d like to see grow both in size and prestige.

“This is just the beginning, and I’ll take it slowly from here,” Pak said in an interview Monday at Butte Creek Country Club in Chico, the site of the inaugural Se Ri Pak Junior Championship.

This is Pak’s first tournament with the American Junior Golf Association (AJGA), but the World Golf Hall of Famer has already been hosting a couple of Korean events - Se Ri Cup Junior Championship and Se Ri Pak Invitational on the Korea LPGA Tour.

“It’s a dream of all players to host tournaments bearing their own names,” said the 39-year-old, who retired last year. “And I have even higher expectations for this event because it will be played in the United States, where I spent my playing career.”

The AJGA approached Pak last year about ways to grow junior golf in the United States. When Pak told the AJGA that it should open the doors to international players, the organization recommended Pak host a new tournament.

With Pak as the host, three Korean players entered the competition without having to go through qualification.

Since Korean junior players have few opportunities to compete at AJGA events, Pak is hoping to bring more youngsters from her home country on board next year.

It was also Pak’s idea to invite players from nine different countries, including China, Germany and the Czech Republic.

“I wanted to create a stage where young golfers could learn about different cultures and make friends from different countries,” Pak said. “When I was playing, I felt it was too late to do that as a pro.”

Pak, who counts five majors among her 25 LPGA titles, said she didn’t realize until recently how much influence she’d had on young golfers around the world. Pak has long been seen as a pioneer for Korean women’s golf, an icon who inspired an entire generation of girls to pick up the sport.

“I now have a sense of responsibility,” Pak added. “And the more tournaments I host, the more confident I’ve become. But I’ve not done this alone. A lot of people have helped me along the way.”

In her post-playing career, Pak, in addition to being a tournament host, has also dabbled in broadcasting, and she was the women’s team head coach at last year’s Rio de Janeiro Summer Olympics.’

“All three roles have been interesting, but I really want to focus on hosting tournaments,” she said. “Like Arnold Palmer and Jack Nicklaus, I’d like to see a tournament bearing my name become a prestigious event. If I take it one step at a time, I am sure I’ll get there.”

Pak said her glowing resume as a player can be a double-edged sword, because it has only heightened people’s expectations of her as a host.

“As a player, I only had to worry about playing well for myself,” she said. “But there are so many other things to deal with when you’re hosting a tournament. And you have to cooperate with other people, which makes the job even more difficult. But I never slacked off as a player, and I am not about to do that now.”

Pak said young prospects often come up to her for advice, and she said it’s important for them to take better care of themselves.

“When you’re having a hard time, you should let it all out and tell people. That way, you’ll be able to enjoy a long career,” Pak said. “When I was playing, I just kept my head down and suppressed all my feelings. If I’d been easier on myself, I think I would still be competitive on the LPGA Tour today.”

Asked if she missed playing golf, Pak laughed and said, “Not at all, because I put everything on the line while I was playing.”

She offered one final bit of advice for junior golfers in her field.

“I’d like to tell them to feel envious of others but never feel jealous,” she said. “If you’re envious of other players, you’ll recognize things you can learn from them. But if you’re jealous, you’ll only see negative things. Even though golf is an individual sport, you still have to respect other players and have good manners.”