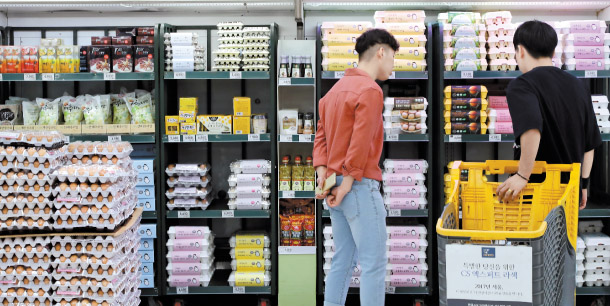 Shoppers look at eggs at a large discount chain in Seoul on Tuesday. Many consumers still remain unsure about the safety of eggs, despite sales resuming. [YONHAP]

There are claims that the shortage of healthy hens created the recent pesticide crisis.

After avian influenza broke out late last year, there has been a significant shortage of hens that are roughly 10 weeks old, the age at which farmers normally buy the chickens. As a result, older hens are being used to lay eggs.

But because older hens are more vulnerable to mites, farms have had no choice but to use more pesticides than usual, likely increasing the contamination of eggs.

According to the Korea Poultry Association there are currently roughly 60 million egg-laying hens in Korea, 20 percent less than before avian influenza broke out at the end of last year.

Local farms typically buy 10-week-old hens and raise them until they are 24 weeks old, at which point they start to lay eggs. The birds are slaughtered when they are 70 weeks old.

“Since avian influenza, hens that aren’t able to produce eggs such as old hens and chicks accounts for roughly 30 percent,” said Nam Ki-hoon, an official at the Korea Poultry Association. “Farms used hens that are older than 70 weeks and even as old as 85 weeks as egg prices went up as a result of avian influenza.”

But these older hens are more vulnerable to mites.

“Obviously the older hens have a weaker immune system,” said a farm owner in South Chungcheong province. “And the time to clean the cages gets postponed the longer the hens are raised and as a result there is an increase in mites.”

While it is more profitable for farms to slaughter hens that are older than 70 weeks because the birds produce fewer eggs while consuming the same amount of food, the rising prices not only of eggs but also of younger chickens prevented some farms from following their normal cycle.

During the avian influenza crisis roughly 25 million egg-laying hens were killed and since then the price of 10-week old hens has doubled.

“The farms that were affected by avian influenza included those that specialize in breeding chickens, so there has been a shortage of young chickens,” explained Nam. “It will take about two to three months for the situation to be solved.”

Egg prices have soared due to the lack of supply. In January when avian influenza broke out the wholesale price of an egg was 210 won. That’s double the 109 won wholesale price in January 2016. But as the situation eased, egg prices settled around 150 won.

Even egg laying farms that have not been impacted by the current pesticide contamination crisis are struggling.

“I don’t know what to do since the government says we can’t use pesticides when there are still mites,” said a farm owner in Cheonan, South Chungcheong.

The farms need to clear out the cages and clean them before getting in new younger hens, but the costs are high. Farmers are also unsure what to do with hens that have been deemed unfit due to pesticide contamination.

In the case of avian influenza, the government culled infected chickens and compensated the farms, but there are no legal guidelines for the current pesticide situation.

“We haven’t started discussions regarding the problem,” said Nam. “There could be confusion depending on the government’s decision.”

There are 50 farms currently labeled as unfit for sales distribution, and roughly 3 million egg-laying hens, or about 5 percent.

The poultry association on Monday held a special meeting where it discussed various measures including shortening the period that chickens are kept or using environment-friendly pesticides. No concrete solutions were reached.

Despite the government’s continuous claim that eggs are safe, consumers are not convinced. Major retailers resumed egg sales on Aug.16, one day after they were suspended, but shoppers have been wary and sales have dropped by half.

According to the Korea Agro-Fisheries and Food Trade Corporation, as of Monday the retail price of 30 large eggs was valued at 7,445 won. This is a drop of 87 won compared to the retail price on Aug. 18 when the pesticides crisis reached its peak. But it is still 150 won higher than on Aug. 14 before the crisis started.

Lotte Mart sold an average of 400,000 eggs a day until Aug. 14, but since the crisis broke out the figure has dropped more than 55 percent.

The situation is similar in other retail stores such as Emart and Homeplus, which saw egg sales drop between 41 percent and 45 percent.

“We’re actually considering conducting our own investigation,” said an official at one major retailer who requested anonymity. “The government would need to have special measures to regain consumers’ trust.”

Shoppers are moving faster than the government. Online communities exchanging information on safe eggs have become very popular in the last week.

The eggs that online communities are recommending are those that have been raised in farms that received the government’s animal welfare certification. These are farms that raise livestock in open spaces rather than confining them in cages. These farms also do not use antibiotics or any chemical agents including growth stimulants and even pesticides on feed.

The recent crisis is more damaging in the sense that unlike avian influenza, where consumers still sought out eggs, consumers’ mistrust has heighten to the point that the media has coined the term “egg phobia.”

“Instead of temporary measures to avoid the situation at hand every time a crisis breaks out, there’s a need to solve the fundamental problems including the way the chickens raised and distributed,” said Lee Sang-mok, an official at the poultry association.