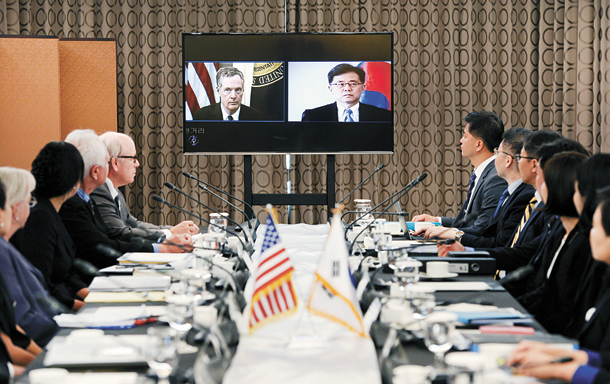 Representatives from Korea and the United States discuss the two countries’ free trade agreement on Tuesday at the Lotte Hotel in central Seoul. [YONHAP]

Representatives of Korea and the United States sat down at the negotiating table in Seoul to discuss possible amendments to the free trade agreement between the two countries, but didn’t announce any final conclusions as of Tuesday.

The meeting was held 42 days after the United States Trade Representative asked to arrange a special session of the Joint Committee under the U.S.-Korea Free Trade Agreement. “The largest trade deal implemented during the Obama Administration - our free trade agreement with South Korea - has coincided with a dramatic increase in our trade deficit with that country,” said the office of the U.S. Trade Representative in an annual report released Wednesday. “Plainly, the time has come for a major review of how we approach trade agreements.”

“The United States counterpart said its deficit rose by 200 percent after the two countries signed the free trade agreement but we said that is not because of the deal and presented various objective research data,” said Trade Minister Kim Hyun-chong. “The agreement allows both countries to prosper.”

Kim added that any changes to the agreement should be made after both countries agreed upon them. “We will continue to cooperate with the U.S. counterpart with an open mind,” Kim added.

It appears that the automobile and steel industries will be targeted for changes. “We are already facing difficulties due to the Chinese government’s retaliation against the deployment of the U.S. missile defense system and we will be hit significantly if we fail to maintain the current export structure [due to the changes in the Korus FTA],” said an industry insider in the automobile industry.

“The important focus of negotiations will be regulation of automobiles and steel, in which the U.S. trade deficit has worsened [since the FTA went into effect],” said Kim Su-jin, a senior researcher at Woori Financial Research Institute.

According to the Korea International Trade Association, Korea’s automobile exports to the United States were $15.5 billion last year, which is 900 percent more than U.S. car exports to Korea. The FTA went into effect in March 2012.