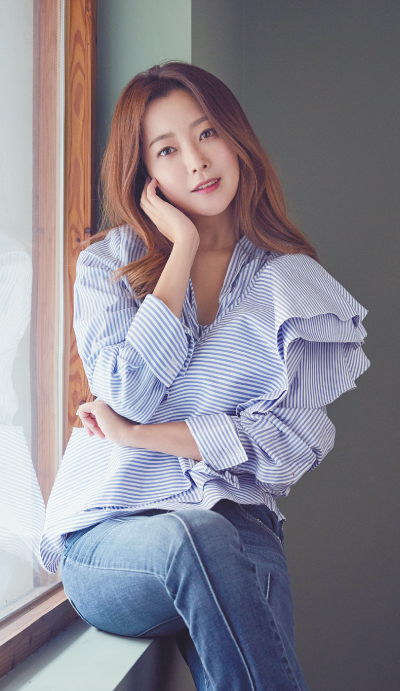 Kim Hee-sun has long been known for her beauty. Her star power lifted the ratings of JTBC’s “Woman of Dignity”. [HUINJI ENTERTAINMENT]

Kim Hee-sun understands fame and its fickle fluctuations better than most. After enjoying popularity in the 90s, she suffered a slump in her career until she returned to fame with 2015’s “Angry Mom.” Her comeback has brought about a renewed interest in the actress’ sense of style, as she has long been known as a fashion icon.

Kim’s appearance as Wu A-jin in JTBC’s “Woman of Dignity” has created a renewed surge of interest in the actress who previously was known more for her looks than her acting skills. Yet her role as a mother and wife who must overcome her rich husband’s infidelity with a cool head has been well received among audiences. The series saw an all-time record viewer rating for JTBC with 12.6 percent during its finale, demonstrating how well Kim’s performance has been received. Despite the good news, she remained determined during an interview with Ilgan Sports, an affiliate paper of Korea JoongAng Daily.

“It was the same reaction with ‘Angry Mom’ in 2015, claiming that this is the second prime of my life,” she said, “Not saying that it’s wrong, I’m just thankful for all of the attention.”

Rather than focusing on her actual roles, Kim opened up about her life and the things that she enjoys. Well-known for drinking with her fans and friends, Kim has not lost her taste for alcohol even after all these years. Demonstrating her drinking skills, she talked for three hours, and even requested to continue even after the interview was over. 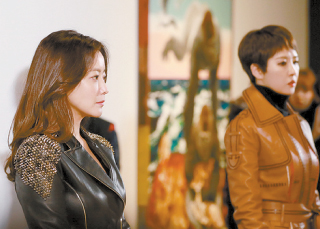 Q. Officially, how much do you enjoy drinking?

A. Definitely more than you think (laughs). I tend to be jovial when intoxicated and never let go of the mike, but it depends greatly on my emotions, my body’s condition and my stomach. Just two days ago, I drank with the cast of [tvN reality show] “Island Trio” while filming with the cast members.

The first episode of “Woman of Dignity” had only a 2 percent viewer rating. What are your thoughts on the drama reaching a record high for JTBC?

I did not expect this show to become as popular. An estimate of 7 percent would have been considered a success, and 9 percent was a pipe dream. Another person who shared this sentiment with me was the writer, Baek Mi-kyung. She said that she hoped this show would be able to do better than her previous work, “Strong Woman Do Bong-soon.” When the ratings were at two percent, however, the set had a depressing atmosphere. We pressured Baek to hurry up with the next episode, and she replied “I thought you and Kim Sun-ah would have brought in better ratings.” That one felt particularly personal, so I responded, “I thought the writer of ‘Strong Woman Do Bong-soon’ could do better than this.” This went on until episode seven, when it started gaining traction. To see the show surpassing expectations was astounding.

Were you initially happy with playing Wu A-jin?

Not initially. I was more inclined to play Park Bok-ja. Any actor would be attracted to a strong character like that. Since it would have been interesting to play a new role, I requested the director to switch roles before it was finalized for Kim Sun-ah. He said no and that my character was suited for Wu A-jin perfectly. His decision was driven home in the scene where Woo’s child, An Ji-hu, sends a very emotional message. The director particularly liked the scene where I asked Ji-hu whether it was fine with her living without her father. I was completely absorbed, imagining asking the question to my own daughter. When Ji-hu replied that she only needed her mother, everyone on set started crying.

With your character’s style being so trendy, viewers have started calling you “saleswoman.” Who is responsible for all of the fashion in each episode?

My stylist read the script to determine which outfit would suit me. It’s fitting to see the fancy outfits that match my role as a woman married to a rich man, but sometimes acting takes precedent over appearance. Emotional or thoughtful scenes require comfortable clothing to be able to focus more on acting, so we had to consider whether the clothes would restrict movement or expression. As for the audience granting me the nickname of “saleswoman,” that would not be an entirely correct assumption. The items I wore were very luxurious and suited for the upper class, so there is little to no quantity available in Korea. Luxury goods like those are made to be sold out quickly. Still, the hairpin I wore when confronting Yun Seong-hui as Wu A-jin seems to have inspired a lot of knockoffs. I think the popularity of the fashion was a sign of how many viewers liked me.

You have a reputation for being beautiful, but is there any part of your appearance that you are dissatisfied with?

A surprising amount, actually. Age doesn’t help - diet, habits and sleeping positions all accumulate on my face and skin. I like to imagine having appeared in a relatively more forgiving time, with less competition.

After having established a name for yourself on TV dramas, what are your thoughts jumping to the big screen?

Movies are a different breed of responsibility compared to TV dramas, because the structures are inherently different. While TV dramas can have many actors interacting with each other, movies are centralized and focuses upon a few main characters. Films depend on a talented actor first and foremost, which brings me to a point that I want to share. There are little to no opportunities given to an actress in her 40’s in the Korean film industry, so if I were given a chance at a role I’d like to do it well. Sadly, middle-aged actresses are off the priority list due to prejudices and a fear of potential failure. This is something I hope does not continue in the future. Only a few people broke this taboo, such as Lee Mi-sook in “An Affair” or Kim Hee-ae in “Secret Love Affair,” but this was after strict image maintenance on their side.

What is your advice for your close friend Song Hye-kyo, who is getting married to Song Joong-ki this October?

Though we have never done work together, she and I enjoy drinking together. I don’t believe that those two will have any problems in future, because they have been through a lot during their lives and have turned out fine. They have been a cute couple since their appearance on the KBS drama “Descendants of the Sun,” with Song Joong-ki as young but considerate and Song Hye-kyo as the older, calm and collected one. Both of them have plenty of experience already through their careers and share a history of mutual cooperation, so it should work out well between them.

How do you view your reputation after your role in “Woman of Dignity?”

I was not overjoyed at the prospective of this “new impression” I gave off to other people, simply because I thought that they were comparing me to my previous works, and judging me based on their standards. Nowadays, after my friends suggested that this was a compliment to be enjoyed, I try to view those opinions as “providing a new, original energy” without downplaying the opinions of others. Twenty years in acting takes more than dedication and effort, so it’s uplifting to hear that they still like me.