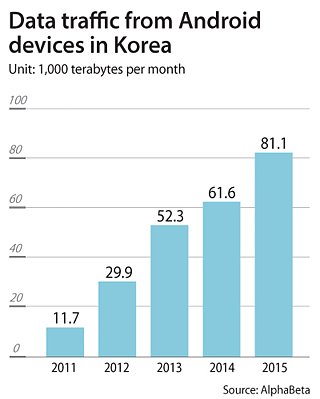 The Android operating system’s economic impact on Korean consumers is estimated at 4.5 trillion won ($40 billion) per year, according to research from global consulting firm AlphaBeta on Tuesday.

Google Korea unveiled the report, which says how much the Android ecosystem contributed to the Korean industry economically after its launch in 2008, ahead of the Fair Trade Commission’s investigation into whether Google abused its market dominance over competitors and phone makers.

Android is an open sourced operating system developed by Google and multiple members of the Open Handset Alliance.

According to AlphaBeta consultant Konstantin Matthies, who visited Google’s Campus in southern Seoul Tuesday to report on the recent analysis, Korean consumers estimated the annual value of the Android operating system they use at 152,000 won, which adds up to roughly 4.5 trillion won for the 30 million local Android users.

The figure was calculated by asking 400 users how much of a discount they would have to be offered in order to give up the operating system. This determines their “willingness to pay.”

The report also claimed that the spread of the Android operating system supported the growth of Korea’s job market.

“In 2015, more than 125,000 individuals, including more than 40,000 Android app developers, said that they are directly or indirectly involved in work related to Android,” Matthies said.