Hyundai is now world’s No. 2 seller of green cars

Hyundai is now world’s No. 2 seller of green cars 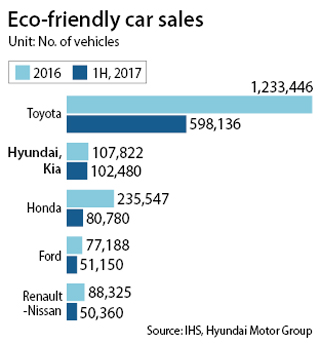 “Eco-friendly car sales jumped over 126 percent year on year,” a Hyundai spokesperson said. “We sold as many cars in the first six months of this year as we did last year [at 107,822].”

Traditionally, Japanese automakers have dominated the eco-friendly market. Honda Motor, which was ranked second at the end of 2016, fell behind Hyundai and Kia in the first six months of this year. Honda sold 80,780 electric cars up to June this year, compared to a total of 235,000 last year.

Hyundai Motor Group first entered the eco-friendly car market in July 2009 with the Avante Hybrid and Forte Hybrid. Since then, the company has introduced various models, including the Grandeur Hybrid earlier this year.

The company’s full electric car, the Ioniq, is considered one of the most eco-friendly models on the market. Its hybrid counterpart was named the most energy-efficient vehicle by the U.S. Environmental Protection Agency last year.

By next March, Hyundai plans to launch a hydrogen-powered car, considered the ultimate type of eco-friendly vehicle by local automakers. The car can reportedly go more than 500 kilometers (311 miles) on one charge.