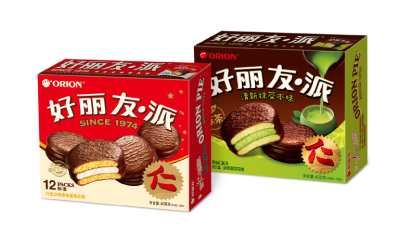 Orion Confectionery reported Tuesday a rebound in sales in China during June and July.

This brought monthly sales in China to around 90 percent of last July’s figure.

Orion said Choco Pie sales in March and April sunk by almost 50 percent but started recovering in May. Choco Pie is Orion’s best-seller in China, accounting for 40 percent of sales.

Orion first started manufacturing the popular chocolate marshmallow snack in China in 1997. This year and last year, Choco Pie ranked No.1 in the China Brand Power Index-the first such achievement for a Korean company.

In China, Orion brands itself Hao Li You, meaning “good friend” in Chinese. The “matcha latte” variation of the Choco Pie was popular there last year, having sold over 60 million units its first two months of distribution last August and September.

Orion’s recovery is a lot faster in China than for other Korean products or services.

Orion Group as a whole saw a deep decline in sales and operating profit during the first quarter of 2017: sales fell 23.8 percent and operating profit 64.2 percent year on year. Despite sales growth in Korea, Vietnam and Russia, the boycott in China took its toll. Chinese sales plummeted 42.1 percent compared to the previous year.

The company appointed a new CEO for its China unit, Lee Kyu-hong, in June to deal with the problems. Orion thought it could revive revenue in China during the year’s second half.

“The Thaad crisis hit Orion hard, but at the same time it motivated the company to cut down on low-margin brands and increase efficiency in terms of human resources and storage management,” said Lee Kyoung-ju, analyst at Korea Investment & Securities.

Analysts say the worst for Orion’s Chinese business has passed.