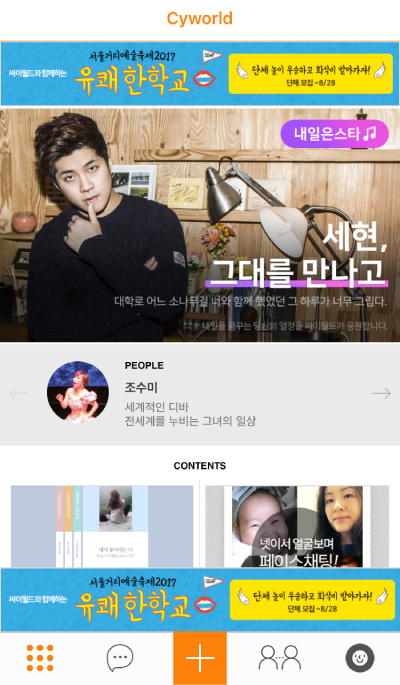 According to Samsung on Tuesday, its start-up investing arm Samsung Venture Investment Corporation has invested in Cyworld, the moribund social network service that had its heyday in the early 2000s before Facebook moved in.

Roughly 5 billion won ($4.4 million) was injected into Cyworld, according to industry sources, though Samsung declined to confirm the exact amount.

While Samsung’s investment company has been investing in promising start-ups in order to strengthen Samsung’s technological developments, it is reportedly the first time the company has invested in a platform service provider like Cyworld.

Industry insiders are guessing the investment was a strategic move by Samsung to further develop its artificial intelligence solution Bixby.

Cyworld, as a platform, could potentially be used as a source from which Samsung’s AI system could draw content such as news reports and music.

That scenario could be similar to Naver using big data and contents accumulated by its portal site as well as chat app Line to power its AI system Clova and speaker-type AI assistant Wave, to be released in the Korean market during the third quarter.

There is also a chance that Cyworld, which was a pioneer in establishing a social networking platform back in the early 2000s, could once again come up with a completely new service powered by Samsung’s technologies and support.

“Samsung Venture Investment Corporation has been continuously finding and investing in promising start-ups and Cyworld was one of those companies,” a spokesperson from Samsung Electronics said. “Nothing has been confirmed as to what kind of collaborative business opportunities can be created between Samsung and Cyworld.”

Cyworld enjoyed its golden age in the early 2000s, after starting operations in 1999, as it came up with a so-called “mini homepage” service for subscribers to the platform. The individual blog space was similar to a Facebook profile page, and people could decorate the space with stylish “mini me” avatars.

Subscribers to the service peaked at 32 million and in 2010 the platform reaped in 109 billion won in sales revenue by selling avatars and music to be played in the blog space.

However, the website has been on a downward slide since 2011 when it was hacked and users’ personal information was leaked. New international services like Facebook, Twitter and Instagram also moved in while Cyworld was slow to adapt to the fast-growing mobile interface.

Cyworld was acquired in 2003 by SK Communications, a subsidiary of top mobile service provider SK Telecom, but was then spun-off in 2014. The service nearly closed in 2016 but was able to merge with live video-based social networking service provider AirLive in July last year.

People currently in their 30s and 40s, who were major users of the platform, are already caught up in nostalgia.

“In my day, Cyworld was a dominant platform and my friends are now waiting to see if Cyworld can revamp itself with the new investment,” said Jo Eun-nam, a 30-year-old Seoul resident.