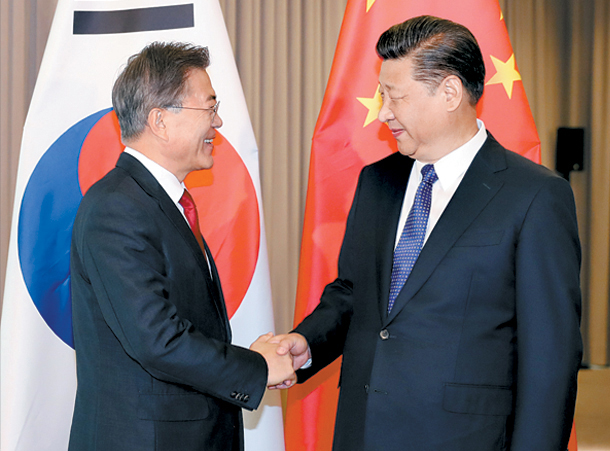 South Korea and China mark the 25th anniversary of the establishment of diplomatic relations on Thursday, but their top diplomats will not be toasting each other, as relations remain strained over the deployment of a U.S.-led antimissile system.

Korean Minister of Foreign Affairs Kang Kyung-wha is not scheduled to attend an official event hosted by the Chinese Embassy in Seoul to mark the 25th anniversary of the start of formal diplomatic relations on Aug. 24, 1992.

Multiple diplomatic sources said Foreign Minister Kang has decided not to attend the reception hosted by the Chinese Embassy at a hotel in Seoul on Thursday.

Instead, Kang is scheduled to depart for Moscow on Thursday. She is expected to meet with Russian Foreign Minister Sergey Lavrov and to make preparations for President Moon Jae-in’s upcoming visit to the country.

Moon is scheduled to attend the third Eastern Economic Forum to be held Sept. 6 and 7 in Vladivostok, which will also be attended by President Vladimir Putin.

Moon and Putin last met on the sidelines of the Group of 20 summit in Hamburg, Germany, last month.

There is a high likelihood that Chinese Foreign Minister Wang Yi will not attend a similar event celebrating the 25th anniversary of bilateral ties to be hosted by the Korean Embassy in China at a hotel in Beijing the same day.

This is in contrast with the 20th anniversary celebration five years ago, when the two countries held a large celebration at the Great Hall of the People in Beijing attended by Xi Jinping, then China’s vice president, along with other key senior officials in 2012.

Korea’s foreign minister at the time, Kim Sung-hwan, attended a reception held by the Chinese Embassy at a hotel in Seoul in 2012, giving a congratulatory speech calling for “coexistence as good partners.” Kim and Zhang Xinsen, then Chinese Ambassador to Seoul, even exchanged “love shots,” linking arms as they drank out of their wine glasses.

On June 22, 2015, Korea and Japan arranged joint celebrations to mark the 50th anniversary of the normalization of bilateral relations despite disagreements over historical issues likes the women forced into sexual slavery during World War II, euphemistically referred to as “comfort women.”

Initially, there was speculation that the Korea-China 25th anniversary event would follow the pattern of that 50th anniversary commemorative celebration between Seoul and Tokyo, which became an occasion to improve relations.

An official of the Korean Embassy in China told the JoongAng Ilbo on Aug. 8, “The Moon Jae-in administration has proposed a joint event to mark the 25th anniversary since its launch in May.”

The two governments had held joint celebratory events for the 15th and 20th anniversaries. However, the idea fizzled this time around, apparently due to a lukewarm response from Beijing.

China’s continued backlash to the Thaad deployment has been the greatest crisis in the two countries’ bilateral relations.

South Korea and China forged diplomatic relations nearly 40 years after the end of the 1950-53 Korean War. Since then, the two countries’ trade volume has expanded some 33-fold from $6.4 billion in 1992 to some $211.4 billion last year, according to the Federation of Korean Industries.

On July 8, 2016, Seoul and Washington - both under previous administrations - abruptly announced their decision to deploy the Thaad system to Korea to defend against Pyongyang’s growing ballistic missile threats.

On April 26, key components of a Thaad battery, including an X-band radar system and two missile launchers, were installed in rural Seongju County in North Gyeongsang, ahead of the May 9 election that brought Moon Jae-in to power.

From the onset, China has fiercely protested the deployment of the Thaad battery to Korea, saying it goes against its national security interest. It has also been concerned over the system’s powerful X-band radar.

Since the deployment decision, Beijing has retaliated economically against Seoul to protest the Thaad battery, implementing restrictions on Korean businesses and the entertainment industry and imposing a ban on Chinese group tours to Korea.

Chinese Ambassador to South Korea Qiu Guohong said in opening remarks at a seminar in Seoul on Monday, “The Thaad issue is currently the biggest impediment to the development of China-Korea relations, and the most difficult issue since the forging of bilateral ties.”

He spoke at an international seminar organized by the Sungkyun Institute of China Studies and the Chinese Embassy to mark the 25th anniversary of bilateral ties.

“There needs to be the intention, faith, sincerity and public sentiment to resolve this difficult issue and return Chinese-Korean relations to a normal path,” Qiu continued. “We need to respect each other’s key interests and important matters of concern and create sustainable, friendly relations and together contribute to peace and stability on the Korean Peninsula.”

China expert Kim Heung-kyu, a professor of political science and diplomacy at Ajou University, agreed with Qiu’s assessment that ties between Seoul and Beijing are at a nadir.

“China, during the leaders’ summit in Germany in July, already conveyed such thoughts to our side,” Kim told the Korea JoongAng Daily, adding, “Chinese President Xi Jinping made the Thaad issue a key interest and conveyed that the Thaad issue is the first gateway to resolving China-Korea relations, and sent a clear message that if Korea does not come up with a means to resolve the issue, there will be no bilateral leader’s summit or improvement in bilateral relations.”

Moon and Xi held talks on the sidelines of the G-20 summit in Bonn, Germany on July 6.

“I don’t think our government recognized the seriousness of the situation,” he continued. “Afterward, we have made many efforts, but China has been refusing to respond.”

Kim also said that the 19th National Congress of the Communist Party of China to be held in October may be forcing a harder line on the issue, but that does not necessarily mean there would be an opportunity to improve bilateral ties afterward.

“Many people say that the President Xi Jinping bolstered his stance on Thaad because of the 19th Congress, but I do not view it this way,” said Kim.

“Xi himself stated this as a key interest, and regardless of the party congress, he has sent a message to the Chinese people that if there is no proactive approach on the issue on the part of Korea, there is also no improvement in bilateral relations.”

He warned that bilateral relations “may even take a turn for the worse.