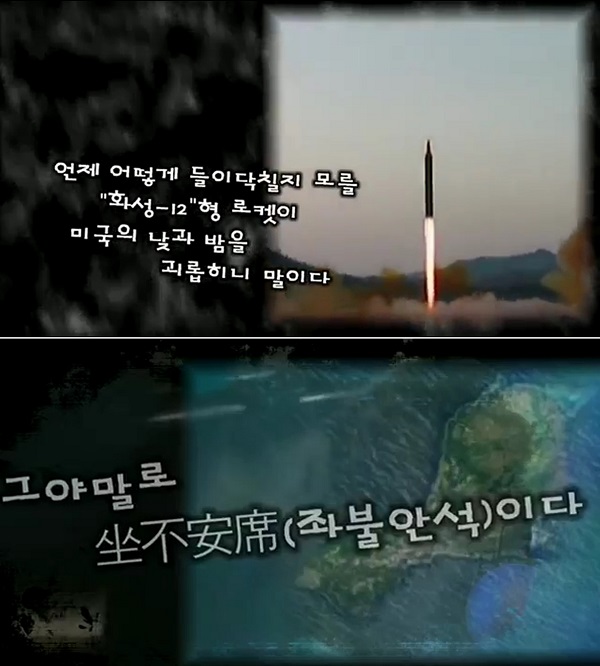 The North did not specify what those consequences would be, but the latest menacing words came three days after a North Korean propaganda website uploaded a video on YouTube showing a simulation of an attack on Guam.

Since early this month, North Korea has been threatening to fire four Hwasong-12 intermediate-range ballistic missiles near the American island, which hosts strategic U.S. military bases.

"The U.S. will be wholly held accountable for the catastrophic consequences to be entailed by such reckless aggressive war maneuvers, as it chose a military confrontation with the DPRK," read an English version of the statement, issued by an unidentified spokesman for the Korean People's Army mission at the truce village of Panmunjom and reported via the state-run Korean Central News Agency.

DPRK stands for North Korea's official name, the Democratic People's Republic of Korea.
"What should not be overlooked is the fact that though the enemies are noisily vociferating about 'annual' and 'defensive maneuver,'" the spokesman said, "the rehearsal is concentrated on the drill of 'beheading operation' and 'secret operation' to 'remove' the supreme headquarters of the DPRK and one for countering the DPRK's ballistic rockets under 'Plan 5015,' an aggressive war scenario to carry out a preemptive strike against the DPRK."

It added, "Such a huddle is increasing the gravity of the situation."
On Saturday, Uriminzokkiri, a website operated by North Korea's equivalent to the South's Unification Ministry, which handles inter-Korean issues, uploaded a four-minute video on its YouTube account purportedly showing a simulation of an attack on Guam.

Americans "will have to open their eyes and ears because they will never know when and how a Hwasong-12 missile will attack them," read the Korean subtitles over footage of a past missile test. "If at least one missile penetrates Guam's air defense network and land in waters near the island, the U.S., which has called itself the world's one and only superpower, will have its delusion exposed to the entire world," read another caption, as the video zoomed in on a map of Guam.

Towards the end, North Korea warned the United States to ruminate on their actions, saying, "Time isn't on the U.S.'s side," while marking down the days of the Ulchi Freedom Guardian drill on a calendar.

The South Korean and U.S. allies kicked off their 10-day joint military exercise last Monday with 50,000 troops participating from the Korean side and 17,500 joining from the United States, including 3,000 overseas enforcements.

Seoul and Washington have argued that the annual drills are defense measures, whereas Pyongyang sees them as rehearsals for invasion. South Korean President Moon Jae-in said Monday that the North's continued provocations were to blame for the military exercises, calling it a "vicious cycle."

The allies snubbed China and Russia's earlier suggestion to scale down the exercises in exchange for North Korea's freezing its nuclear and missile development programs.