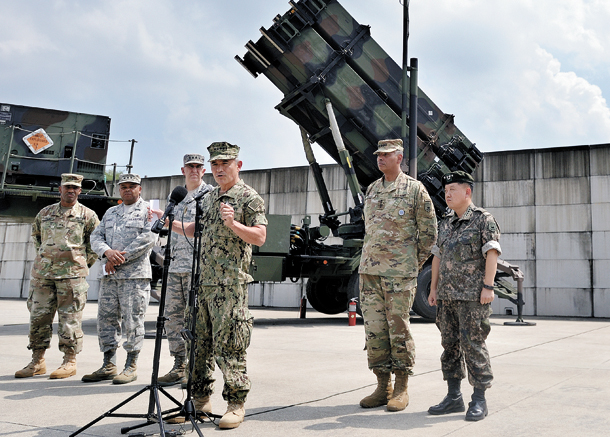 Top brass from the U.S. military and a delegation of bipartisan lawmakers emphasized diplomacy as the key to dealing with North Korean nuclear threats on a visit to Seoul Tuesday.

“The most important starting point is the diplomatic starting point,” Adm. Harry Binkley Harris, chief of the United States Pacific Command, told reporters Tuesday at the Osan Air Base in Gyeonggi. “So we hope, and we work for a diplomatic solution to the challenge presented by [North Korean leader] Kim Jong-un. And a strong diplomatic effort - backed by a strong military effort - is key because credible combat power should ... support diplomacy, and not the other way around.”

Harris, along with Gen. John Hyten, chief of the Strategic Command, and Lt. Gen. Samuel Greaves, director of the Missile Defense Agency, were visiting Seoul amid the ongoing Ulchi Freedom Guardian joint exercises between South Korea and the United States, which kicked off the previous day.

The three top military commanders, joined by Gen. Vincent K. Brooks, commanding general of the U.S. Forces Korea (USFK), held a rare joint press conference at the base, and Harris explained that the ballistic missile defense destroyers and cruisers in the region are part of a layered defense to protect the United States and its allies, along with its Patriot interceptor missiles and Terminal High Altitude Area Defense (Thaad) battery.

“A diplomatic lever has to be applied first and a diplomatic lever is stronger, more effective, more powerful, if backed it’s backed by credible military power,” Harris said. “And that is what the Republic of Korea-U.S. alliance represents. It represents a very strong military back-up to our diplomats who should take the frontline, in my estimation.”

Harris said he did not publicly describe “tripwires in advance” - what sort of red line North Korea would have to cross for Washington to take military action.

“These exercises are very important,” Gen. Brooks said on the ongoing joint military drills. “We have had the responsibility of providing military options to our national leaders, and exercises are a way of making sure that the option is a ready option, a capable option. And that’s what really underpins deterrence. So in our view, we have to continue to exercise until we have a reason not to.”

He continued, “That may cause some noise form North Korea. That’s what we routinely expect. But it doesn’t stop us in our resolve to be as ready as possible and leave the greatest number of options.”

Brooks also addressed North Korea’s intercontinental ballistic missiles (ICBM) threat and said, “We have seen through demonstrated ability that there is a rapidly developing capability in North Korea; they’re learning quickly, and they’ve stated what they’re after.”

He continued, “As a military man, I take them at their word and have to be prepared to counter that if possible and to ensure that it doesn’t happen in the first place if we can - that’s the credible deterrence that we spoke about earlier, while we are giving diplomatic actions and economic actions a chance to be successful.”

Brooks said that whether North Korea has mastered the technology to miniaturize a nuclear warhead and place it on an ICBM is “frankly a bit academic ... Their expressed intent is what I operate off of.”

Harris stressed a similar message in a meeting with South Korean Minister of Foreign Affairs Kang Kyung-wha the same day, saying, “Diplomacy should always be the main battery,” supported by military defense.

A bipartisan, bicameral U.S. congressional delegation led by Sen. Edward J. Markey of Massachusetts, the senior Democrat on the U.S. Foreign Relations Committee’s East Asia Subcommittee, likewise emphasized there is no military option and called for a peaceful solution to the North Korea issue.

“We must acknowledge that a preventive war will not solve this problem and it would make matters much, much worse,” Markey said at a press conference Tuesday at the Four Seasons Hotel in central Seoul.

His remarks come after a period of escalated tensions following President Donald Trump’s “fire and fury” warning to the North, which threatened to strike the waters near Guam.

Markey was joined by Democratic lawmakers Sen. Jeff Merkley of Oregon, Sen. Chris Van Hollen of Maryland and Rep. Carolyn B. Maloney of New York, as well as Republican Rep. Ann Wagner of Missouri. They were on the second leg of a three-country tour of Japan, South Korea and China to meet with elected leaders and military and government officials to discuss the North Korean threat to the region. The group also met with President Moon Jae-in on Monday, and Markey said based on his discussions with the South Korean leader, “I have concluded that the United States can only peacefully resolve the threat of a nuclear North Korea by pursuing a bold, realistic strategy in close concert with our allies in [South] Korea and Japan.”

Markey called for direct diplomacy with Pyongyang. “Talking with North Korea is not a concession; it is the only way to reach agreement to denuclearize the Korean Peninsula.”

The congressional delegation called for intensifying economic pressure to bring Pyongyang to the negotiating table and urged China to exercise its economic leverage and cut the flow of oil to North Korea.