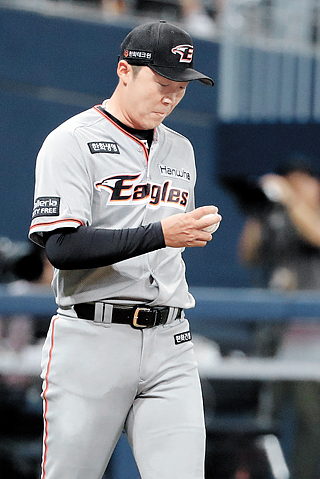 Bae Young-soo, pitcher for the Hanwha Eagles, has been given a warning for illegal pitching during the recent game against the Lotte Giants at Daejeon Hanbat Baseball Stadium. [JOONGANG PHOTO]

As the game between the Hanwha Eagles and the Lotte Giants came to an end on Sunday, fans turned to message boards on the Korea Baseball Organization’s website to complain about Bae Young-soo’s illegal pitching.

Throughout the game Eagles’ pitcher Bae put rosin, a powdered form of resin, on his right thigh and rubbed the baseball against it before he made his pitch. In baseball, rosin allows pitchers better control as it increases friction. Bae also rubbed rosin on his glove.

Bae’s actions during the game were clearly a violation of rule 8.02(a). Despite the blatant rule breaking, Bae wasn’t punished during the game. The KBO has no rule regarding penalizing players for illegal actions after the game is finished, so despite the uproar from fans, he has escaped with only a warning.

“At the time, we weren’t able to check Bae Young-soo’s movements,” said one of the game’s umpires. “When we went through a video review after the game, it was clear that he pitched illegally. It is our mistake for not noticing it during the game.”

Bae apologized for the incident before the Eagles’ game against the KT Wiz at Suwon Baseball Stadium in Suwon, Gyeonggi on Wednesday. 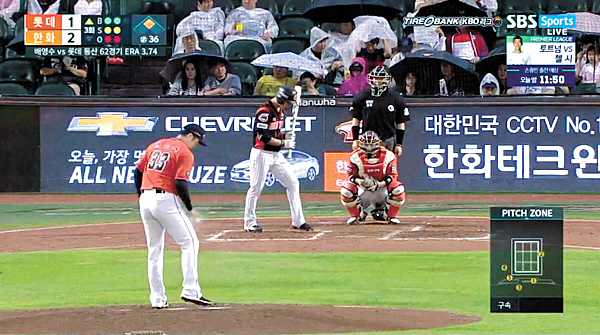 Bae Young-soo, far left, rubs a baseball on his pants during the game against the Lotte Giants on Sunday. [SBS SPORTS SCREEN CAPTURE]

This wasn’t the first time Bae has been accused of breaking the rules. In another game against the Giants on April 27, Bae frequently shook either his leg or his ankle to mess up the timing of the batters. At the time, Cho Won-woo, the Giants’ manager, appealed to the umpire but Bae wasn’t penalized as the official felt that it couldn’t be determined that his movements were definitely intentional.

In Bae’s 16 year career he has picked up more wins, 134, than any other active pitcher in the KBO. He was once the Samsung Lions’ ace pitcher and was revered by fans after his successful return from an elbow surgery.

But those days seem to be over. As Bae continues to break the rules and get away with it he is starting to lose the support of the fans, possibly muddying his legacy as a great right handed pitcher.

Illegal pitching has long a history in the world of baseball. The most famous form is “spitballing.”

Spitballing refers to when a pitcher spits on, or otherwise applies a foreign substance, to the ball in order to alter its wind resistance and change how the ball moves through the air. In the KBO, Lee Yong-hoon of the Giants fell under suspicion of spitballing in 2012 after he made a gesture that looked like he was biting the ball.