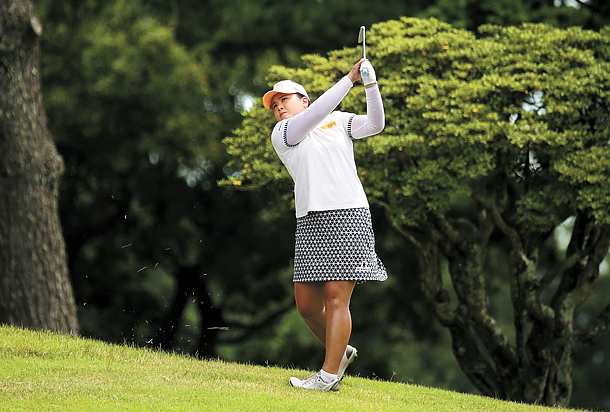 Park In-bee watches her tee shot during the final round of Jeju Samdasoo Masters at Ora Country Club on Aug. 13 in Jeju. [YONHAP]

Korean golfers return to the LPGA Tour this weekend with the hope of continuing their winning streak at the Canadian Pacific Women’s Open in Ottawa, Ontario.

Starting with Park Sung-hyun’s victory at the U.S. Women’s Open in July, they have won four consecutive tournaments and, despite a two-week break from competitive golf, hope to be the first Koreans to get five consecutive wins.

In the past, Korean golfers have won four consecutive tournaments in 2006, 2010, 2013 and 2015. In the 2006 season, starting from Han Hee-won’s victory at LPGA Corning Classic, Lee Seon-hwa, Pak Se-ri and Jang Jeong continued the streak.

Then in the 2013 season, Park In-bee won three consecutive tournaments, starting with the Wegmans LPGA Championship, and Park Hee-young won the Manulife Financial LPGA Classic for another consecutive four. Throughout the LPGA Tour history, the 2015 season was by far the best season for Korean golfers, as they won a total of 15 tournaments. During the first half of the season, they won 12 tournaments out of 20, which is better than they have done so far this season.

As such, the Canadian Pacific Women’s Open will be the most important tournament, as it is the first in the second half of the season, and their one chance to hit number five.

Including Park Sung-hyun, who returned to Korea for the first time in six months, Ryu So-yeon and Park In-bee will be competing this weekend. During the two weeks, rather than playing in a tournament to keep sharp, Park Sung-hyun chose to take a break, whereas Park In-bee competed in a KLPGA tournament, the Jeju Samdasoo Masters, finishing tied for 56th.

Ryu, the current No.1 player in the Rolex World Ranking, captured her third LPGA Tour victory at the tournament in 2014. Along with Ryu, Amy Yang, Lee Mi-hyang and Kim Sei-young will also be competing this weekend for their chance to capture their second victory of the season.

During the break, Lee and Kim stayed competitive by playing in the Bogner MBN Ladies Open, a KLPGA Tour event, last weekend. They hope to redeem themselves this weekend after their disappointing performance in last week, finishing tied for 32nd and 24th.

Chun In-gee, Hur Mi-jung and Chella Choi will be competing this weekend, hoping to win their first tournament of the season. And Kim In-kyung, who has already won three tournaments this season, will take another week off from competitive golf.

The first round of the Canadian Pacific Women’s Open will be aired live on JTBC Golf channel starting tonight at 11:30 p.m.