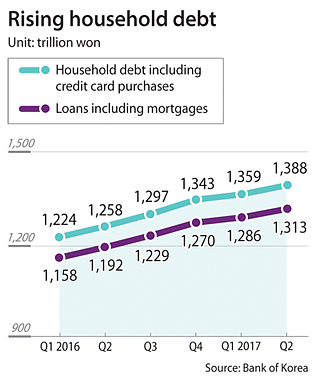 Household debt edged closer to the 1,400 trillion won ($1.2 trillion) mark than ever before in the second quarter, according to a Bank of Korea report Wednesday.

The increase in household loans was largely due to the real estate market, which has been picking up speed since President Moon Jae-in won the election in May, ending the political uncertainty following the impeachment of former President Park Geun-hye due to the political scandal involving her confidante Choi Soon-sil.

In fact, the biggest contributor to the overall loan figure was mortgages. Between April and June new mortgages accounted for 14.5 trillion won, or 89 percent, of additional debt.

As the real estate momentum continued until the Moon administration introduced tougher measures on Aug. 2, it is likely that household debt will exceed the 1,400 trillion won mark in the third quarter.

In fact, an earlier announcement by the Financial Supervisory Service showed that 9.5 trillion won of loans were taken out in July, with an additional 2.2 trillion estimated to have been lent in the first 11 days of August.

The launch of the nation’s first internet bank contributed to the increase in unsecured loans. K bank, which opened in April, gained huge popularity from people seeking loans as it offered a lower interest rate to those with mid-to-lower credit ratings than existing financial institutions. The online exclusive bank is estimated to have lent 500 billion won in unsecured loans in the second quarter.

The unusually long holiday in May is also believed to have contributed to the increase in household debt and credit card purchases.

In the first week of May many people took at least a week-long break as three national holidays coincided. The first holiday, Labor Day, was on Monday and the last holiday, Children’s Day, was on Friday, allowing a lot of people to take a break for the entire week. This resulted in a peak in credit card use.

As the level of household debt, which is considered to be a threat to national economic growth as it can limit spending and increase risk, is continuing to rise, the government is planning to announce new countermeasures next month.

“Initially we were planning to announce comprehensive household debt measures in August, but we decided to announce them in September after carefully analyzing the second quarter household debt,” said Ko Hyoung-kwon, vice finance minister, on Monday.