Only 4.7% of SMEs willing to reshore int’l facilities

Only 4.7% of SMEs willing to reshore int’l facilities 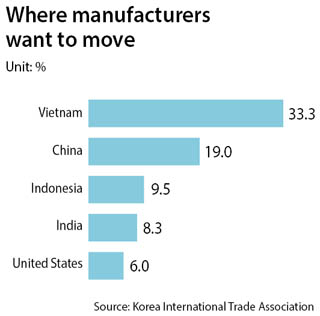 More small and medium-size businesses are planning to expand their overseas operations, rather than bringing production facilities back to Korea, warned the Korea International Trade Association Wednesday.

According to a report from the business lobbying group, 25 percent of the 1,015 small and midsize enterprises that have their own production facilities have based at least some of them in overseas markets. On average roughly 32 percent of the companies’ sales revenue comes from those overseas facilities.

Firms locate production facilities outside Korea for a number of reasons including lower production costs, cheaper labor and to more quickly respond to export market forces, the survey said. Other reasons cited by companies were expanding localized production and avoiding potential tariff and non-tariff barriers for trade. Overseas sites can also act as a logistics hub for nearby countries. The most popular location for overseas production facilities was Vietnam, followed by China.

“To boost the domestic economy and create more jobs in the country, the government needs to come up with measures to encourage firms to bring production home such as expanding business incentives,” the Korea International Trade Association noted in a press release.

Korean firms moving abroad could mean massive job losses for Korean workers as well as a shrinking contribution by SMEs to the country’s economy, the research from the business group noted.

“There is some support given by the government for firms that move facilities back to Korea, but until now the incentives haven’t been enough to compensate for the potential cost for SMEs,” said Jang Hyun-suk, a research fellow from the Korea International Trade Association. “Lifting some regulations on reshoring firms or cutting corporate tax could be possible measures to invite more SMEs home.”