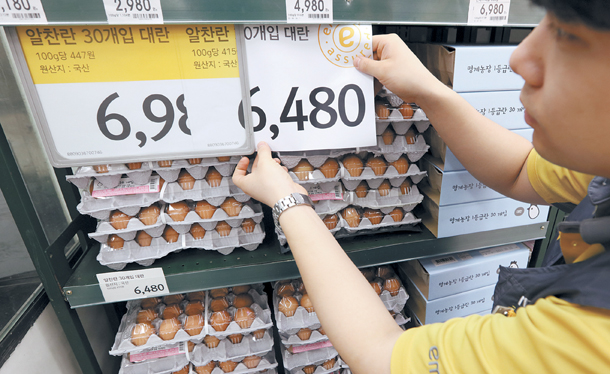 An employee at the Emart in Yongsan District, central Seoul, changes the price of eggs on Wednesday. Korea’s three largest discount retail chains lowered the price of 30-egg trays in response to falling demand. [YONHAP]

Lotte Mart did the same, reducing the price of the same product by 600 won to 6,380 won. It initially announced in the morning that it would shave off 200 won, but after protests from consumers, Lotte Mart raised the discount.

Retailers were forced to temporarily halt egg sales on Aug. 15 after the government detected traces of harmful pesticides in some eggs. Emart and Lotte Mart reported that egg sales dropped around 40 to 45 percent compared to the previous week as a result. Homeplus did not disclose any figures.

The discount chains say they may further lower prices depending on consumer demand. The price of fresh produce is determined every week based on the movement of producer prices set by domestic farms. As of Wednesday, the producer price of one large-sized egg was 127 won, according to the Korea Poultry Association. This is down nearly 25 percent compared to the producer price before the government discovered contaminated eggs.

Egg prices had soared around May and June, affected by a shortage of hens after mass culling in the winter following a bird flu outbreak. The producer price of one large-sized egg reached an average 186 won.

During the harvest festival, egg consumption typically peaks as Koreans prepare food for ancestral rites. One of the main dishes, a pancake dish called jeon, requires heavy use of eggs.

“The general outlook is that egg prices will go down, see a short boost during Chuseok and continue falling if consumer sentiment about the [pesticide] issue remains unrelieved,” Lee said.