‘Farmers should be allowed to use pesticides on empty cages’

‘Farmers should be allowed to use pesticides on empty cages’ 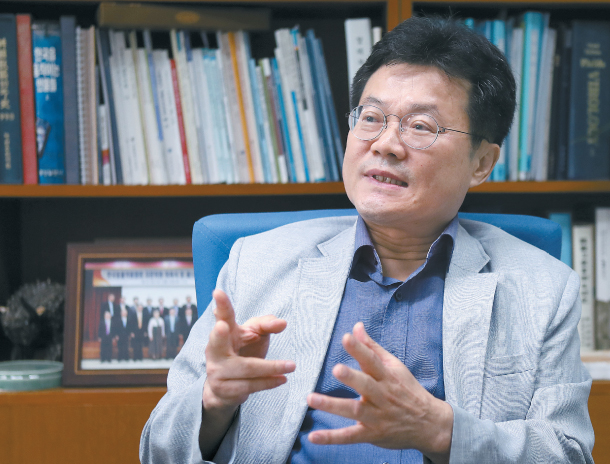 The scandal surrounding eggs contaminated with insecticides is showing meager signs of improvement. Even though the government tried to calm the public by proclaiming that the eggs from farms, except for 49 found to have produced tainted eggs, are safe after inspection, the reality is hardly relieving.

Battery cages the size of 0.05 square meters (5 square feet) still breed laying hens and the recent climate change has made it much easier for mites to grow. Unless overall circumstances improve, it seems nearly impossible to eliminate mites, the core of the scandal.

Worse is the fact that 63 percent those 49 farms unfit for egg production touted themselves as eco-friendly or organic. The overall control system — from pesticide management to eco-friendly certification for eggs — appears to have broken down.

Kim Jae-hong, professor of veterinary medicine at Seoul National University and director general of the World Veterinary Congress, slated to kick off in Incheon on Aug. 27, says the ongoing calamity is the result of a loophole in the quarantine system and climate change.
He shared his expertise in a recent interview. The following are excerpts.

Q. Do you think the battery cages confining egg-laying hens are the key culprit?

A. Even if you don’t raise chickens in battery cages, mites would grow. Even those eco-friendly farms in Europe found mites. Battery cages are not the direct cause because mites come from outside, but they could make things worse.

How do mites attack hens?

They are too small to notice since they are 0.5 millimeters wide. They hide behind the wall or in the floor in the daytime and become active at night. When they form a crowd, the situation gets really serious.

Since when have mites become problematic?

It’s so chronic that it’s hard to say when. But it has never been as severe as this year. When the weather gets hot, they grow faster, exploding in number.

Is there scientific evidence that mites are affected by climate changes?

Climate changes have a direct impact. Blood-sucking insects such as mosquitoes and mites migrate according to the climate. As the weather in Korea increasingly becomes subtropical, they tend to move to the north. There is a higher chance that mosquitoes will grow in number should the climate get hotter.

How does Europe control mites?

When the chicken cages are empty, they clean them thoroughly. They also try to reduce the population density of the cages. But as they reached a moment when these measures no longer worked, the Netherlands and Belgium finally began to use insecticides. As long as there are chickens, there will be mites, in varying numbers.

Is it problematic that eggs are contaminated?

Yes. When hens intake insecticides, the materials are absorbed in the skin and fat. Since chickens do not have sweat glands, the contaminants are piled up in the fat and some move to spawning organs, infecting eggs.

The level of bifenthrin permitted for humans is 0.01 milligrams, but some eggs were found to contain more, right?

The amount of excess is not too high. Those pesticides found in eggs this time are not that harmful to humans because they are not absorbed in human bodies.

Do you think there is enough expertise in the inspection workforce?

Those inspectors are far from being experts. They are just administrative public servants. Inspectors are supposed to be fully aware of the system at the farm and find problems.

Is it crucial to train them properly?

They should be trained on a regular basis so that they could learn about the system. There are a lot of certification systems, but they are hardly effective.

Why is the public dubious about the farm inspection that wrapped up on Aug. 18?

Under normal circumstances, inspectors visit every random cage and collect egg samples. But there was no consistency. In some farms, the owners handed them egg samples, and in others, inspectors did not even enter the farms. Those farms that refuse the entry of inspectors should be slapped with strong penalties in the future.

Is chicken meat safe to eat?

Chickens are made into meat products just one month after birth. There is no time for mites to grow in them.

Is it surprising that the situation with organic or eco-friendly farms was worse than ordinary ones?

Laying hens remain economical. They are withdrawn from the cages and are killed after a year. It’s effective when pesticides are sprayed in every corner of empty cages. But those farms labeled as eco-friendly are banned from such measures — a side effect of excessive regulations.

Why do you think this loophole exists in the certification system?

At the point of inspecting the farms for issuing the certification, the process is very strict. But once farms are certified, authorities barely control them on a regular basis, which resulted in the loophole.

How do you think it could improve?

Authorities should impose strong penalties when farms are found to have violated regulations. Those farms that are doing fine should receive incentives.

What do you think farms should do?

They should feel frustrated because mites would proliferate when they are banned from using pesticides. There is no alternative for them.

What measures do you think the government should take?

The government should amend the rules so that eco-friendly farms can spray pesticides when chicken cages are vacant. It should also monitor eggs after a certain period of time and develop vaccines for mites.

It seems like the scandal is related to animal welfare, doesn’t it?

When the government came up with measures to improve avian influenza quarantine process, it proposed that the minimum space for each chicken be raised from 0.05 square meters to 0.075 square meters. But laying hen farms severely protesting because they are supposed to rebuild cages, a huge cost for them. The government should apply the measure over a long term.

How about pasturing hens?

When they are able to bathe in soil, mites will naturally be brushed off. But when chickens contact wild birds, they can become susceptible to avian flu.