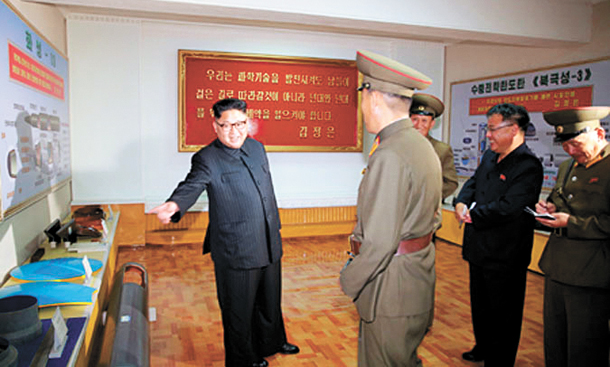 The Korean Central News Agency (KCNA) did not specify when the “field guidance” of the Chemical Material Institute of the Academy of Defense Science took place, but Pyongyang has often reported Kim’s visits a day later. Tuesday was the second of a 10-day Ulchi Freedom Guardian drill between the United States and South Korea, highlighted by a rare joint press conference by top U.S. military officials at Osan Air Base in Pyeongtaek, Gyeonggi. The officials stressed diplomacy in solving the North Korea crisis, but was quick to add that the joint military drills are a way of showing that military options are “a ready option, a capable option.”

Ten photos ran with the report, one of which showed a smiling Kim in a room where anatomical charts of a Pukguksong-3 submarine-launched ballistic missile (SLBM) and a Hwasong-13 ICBM were hanging on opposite sides; the missiles have never been tested before. A South Korean government official admitted on background that local authorities were especially on high alert over the SLBM photo because North Korea carried out several SLBM engine tests last month at the Sinpo shipyard in Hamgyong Province, which in past cases usually came prior to an actual test launch.

The North has a history of displaying actual weapons, or graphic designs of them, via state media in order to flaunt its military prowess to the world, said Shin Jong-woo, secretary general of the Korea Defense and Security Forum. But to show off arms that have yet been fully developed or tested, added Shin, means Pyongyang was trying to escalate its threat even further.

Kim’s on-site inspection is the first in eight days, the most previous being on Aug. 14, when he visited the Korean People’s Army Strategic Force to be briefed on an operational plan firing four intermediate-range ballistic missiles into waters near Guam, an island in the Western Pacific, which hosts strategic U.S. military bases. The sheer number represents a drastic fall from August 2016, when Kim appeared in North Korean media making 10 such inspections.

“Whether or not Kim Jong-un’s field guidance lands in North Korean news relies heavily on propaganda concerns,” said the South Korean government source. “In early August this year, he physically came as close to South Korea as 1 kilometer (0.6 miles) away from the inter-Korean border, but it wasn’t reported. “Facilities related to the country’s missile development usually require an extreme level of security, which is why [the report on the chemical institute visit] comes as a rarity.”