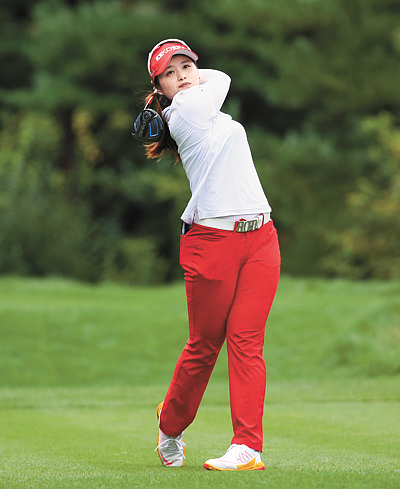 Choi Hye-jin watches her shot during the final round of the Bogner MBN Ladies Open on Sunday. [YONHAP]

As Choi Hye-jin, two-time KLPGA tournament champion this season, turned professional on Thursday, Lim Sun-wook’s golfing career is back in the limelight, since Choi is following a similar path.

During the 1999 season, the year Choi was born, Lim Sun-wook appeared on the Tour out of nowhere. Throughout the season, Lim won two tournaments at age 16, playing in only five KLPGA tournaments.

As a result, she quickly received a great amount of attention as the next Pak Se-ri or Kim Mi-hyun, representing Korea on the global stage, and in 2000, Lim went pro, signing a two-year sponsorship deal for 300 million won ($265,932).

She was the new superstar of Korean golf, and she had earned it, employing unusual methods such as training in a cemetery as an elementary school student or shouting in department stores to overcome her shyness and help her perform in front of crowds. 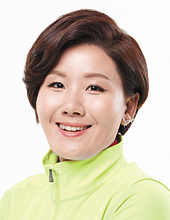 But the glory didn’t last.

In Lim’s first tournament as a professional, she finished seventh, and during an event in 2000, she was the biggest upset in the tournament, defeating Pak in the round of 16. Lim finished runner-up, losing to Chung Il-mi in the finals. After her spectacular debut, however, she struggled.

“My greens hit percentage in the first two to three seasons on the KLPGA Tour was good enough to be ranked in the top three,” she said, “but I struggled with my putting.”

After playing four seasons on the KLPGA Tour, Lim left to play on the JLPGA Tour. She had to play with a conditional seed, and a year after, she earned herself a full seed, but struggled with driver yips, which led her to return to Korea in 2007.

During the 2007 ADT Championship, Lim was given a shot at winning her first tournament, and led the field by two shots in the final round.

But once again, she failed to maintain her lead, as Shin Ji-yai overcame her for her ninth KLPGA Tour victory.

“I was rushing for a victory because at the time, I was already a seventh year professional but had yet to win a tournament,” Lim said. “I wanted my reputation from the amateur career back.”

Upon completion of the ADT Championship, Lim’s name fell from media mentions, and in 2012, she retired without a single professional win. Following her pro career, she coached the backup national team for three years and now trains golfers at Huons and sometimes appears as a broadcast commentator.

Usually, once a golfer turns pro, it becomes their career. Since each shot can be converted into money, many players find it difficult to play as comfortably as before.

“I had a lot of top ten finishes,” Lim said. “I didn’t miss that many cuts, but when I did, it became bigger news. I hurt myself by practicing too much so as not to be forgotten by the fans, so I didn’t have time to look around.”

This, above all else, is the advice this old pro has to give to the young star now walking in her shadow.

She added, “Choi Hye-jin is really good. She’ll be successful, but I don’t want her to put too much pressure on herself.”