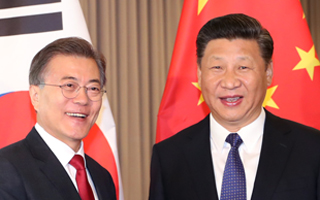 Korean President Moon Jae-in, left, and Chinese President Xi Jinping shake hands at their first summit meeting on July 6 on the sidelines of the Group of 20 Summit in Hamburg, Germany. [YONHAP]

South Korea and China have been jointly celebrating the establishment of diplomatic relations every five years. The 20th anniversary celebration was held in Beijing in 2012 with Xi Jinping, then vice president, in attendance.

This year, various academic conferences and concerts were held in time with the 25th anniversary, but there was no event jointly hosted by both governments. It’s a sign that Korea-China relations are facing difficulties with discord over deployment of the Terminal High Altitude Area Defense (Thaad) missile shield. There is something to be learned from how one security issue can shake up the root of the relationship: The static stability of refraining from addressing uncomfortable issues has expired.

China is already experiencing transitional friction with the United States over its emergence as a global power. China wants to secure a bridgehead in the region and criticizes South Korea for not deviating from the security umbrella of the United States. Rather than understanding South Korea’s dilemma, China has lost the composure of a great power and is demanding a hasty choice.

South Korea’s view on China has also changed. Since the Thaad risk directly translates to economic risk, skepticism over China’s constructive role on the Korean Peninsula is spreading. It has become a psychological obstacle for President Moon Jae-in to discuss development of a real strategic partnership with China.

The changing environment reminds us that Seoul-Beijing ties need to be reset. The current security structure of the peninsula is going beyond a bilateral relationship, and competition rather than cooperation is intensifying in the economic realm. Despite more than 10 million people visiting each other annually, friendliness between South Korea and China is not growing. As long as the two countries fail to reach a cooperative agreement on structural security issues like the South Korea-U.S. alliance, reunification of the Korean Peninsula and existence of the North Korean regime, discord like the one on Thaad can always occur and shake the bilateral relationship.

At this juncture, we need to break out of the so-called neighbor syndrome of literally reading China’s changes and believing we know about our close neighbor well. A kind of a red line should be set on South Korea’s core interests, and when it is crossed, we should have the courage and diplomatic assets to say no.

But it takes two to tango, and China also needs a new approach toward South Korea. Korean democracy born in the public square has begun to project itself in Korean policy toward China. If China continues to underestimate the public opinion and sentiment of Koreans, which is both the greatest asset and burden of the Moon administration, China will be unable to create the order it wants on the peninsula.

There are many new questions arising over the South Korea-U.S. alliance but few on South Korea-China cooperation. That shows China has not yet emerged as an attractive and responsible neighbor. Therefore, before expecting South Korea’s concession, China needs to propose a creative vision to cooperate with the Moon administration, which hopes to create a breakthrough in inter-Korean relations.

The 25th anniversary of diplomatic ties between the two countries is celebrated in order to prevent discrepancy between the two countries’ views leading to tremendous opportunity costs. We need to learn from the failure of China-Japan relations, which were established in 1972. As the strategic interests of China and Japan grew, discord intensified, and the two countries have been unable to get out of that frame of mind. Celebrations for the 40th anniversary of China-Japan relations were held separately in Beijing and Tokyo in 2012. It is hard to expect the 45th anniversary scheduled for next month to be celebrated jointly, and there is no guarantee that the South Korea-China relationship will not follow the same path.

Bamboo can grow tall and straight because they have nodes. Korea-China relations should have proper nodes and prepare for a new normal. Only then will the growing pains we are enduring today have historic meaning.

President Xi has emphasized that whenever an opportunity arises, the two countries need to go back to the fresh mindset of 1992, when ties were first established. In retrospect, the entanglements of time have unraveled thanks to the strategic vision and political determination of the two countries’ leaders. Here and now, we need to recall the experience and lesson once again.

*The author is a professor of political science and international affairs at Sungkyunkwan University and director of the Sungkyun Institute of Chinese Studies.