Int’l visitors expected to decrease by 27% this year

Int’l visitors expected to decrease by 27% this year 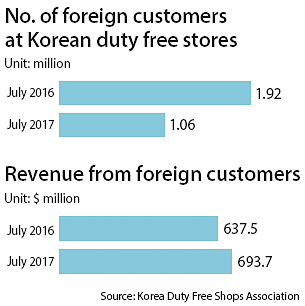 Various external factors such as China’s group tour ban and geopolitical tensions are expected to deal a massive blow to the Korean tourist industry, with the number of visitors this year projected to decline 27 percent from a year earlier to 12.67 million, according to the Korea Tourism Organization (KTO) on Thursday.

The state-run agency said it would tackle the crisis by improving the quality of Korea’s tourism programs so that the per-capita spending of travelers increases and more tourists from other Asian countries such as Taiwan, Japan and Vietnam are attracted to Korea.

The fallout from the Chinese government’s measure in March to prohibit group tours to Korea in retaliation against the decision to deploy the Terminal High Altitude Area Defense antimissile system has been huge. The number of so-called youke, or Chinese tourists, plunged 62.4 percent in the first seven months of this year from the same period a year earlier, data from the tourism organization showed.

On the other hand, more Koreans made overseas trips in the same period. The number of Koreans traveling abroad increased by 18 percent. The number of people traveling abroad is expected to spike in October as Chuseok, or the harvest festival, holiday is unusually long this year. Overseas travelers in 2017 are projected to increase by 19.4 percent on year to 26.61 million.

“It is almost certain that such a dysfunctional situation where the number of outbound travelers are double the number of inbound travelers will be repeated - for the first time since just before the global financial crisis in 2008,” said Chung Chang-soo, president of the KTO, in a meeting with some 42 local and overseas branches of the organization to discuss the emergency on Thursday.

Chung forecasted that the travel deficit could amount to an all-time high of $15 billion this year, considerably higher than the $10.8 billion in 2007.

“The complicated crisis now under way is striking evidence that Korean tourism is extremely susceptible to external factors,” said Ahn Duk-soo, head of international tourism strategy at the KTO.

The agency is stepping up marketing efforts to attract more tourists. In Vietnam, which sent 29 percent more tourist to Korea in the first seven months of this year from a year ago, special promotions for Korean products will be held on Oct. 20, Women’s Day in the country.

In Kazakhstan and Mongolia, where the tourism organization opened local branches this year, Korean tourism and culture promotional events are planned in the latter half. The organization will take part in the Jata Tourism Expo in Japan in September and install outdoor advertising signboards in various parts of China to celebrate the 25th anniversary of diplomatic ties between Korea and China.

To ramp up the amount foreign tourists are spending, the organization plans to develop more medical and wellness tourism as well as premium tourism programs.

Revenue for duty-free stores actually rose between March and July. According to the Korea Duty Free Shops Association on Thursday, per-capita spending of foreign shoppers in July almost doubled to $655 from $333 a year earlier, thanks to Chinese shoppers making mass purchases.

Duty-free stores now face the task of raising profitability. Despite the increase in revenue, they have been holding promotional events and marketing schemes to lure in more customers, which have been eating into profits.

Lotte Duty Free, the No. 1 duty-free business, posted an operating loss of 29.8 billion won ($26.4 million) during the second quarter.