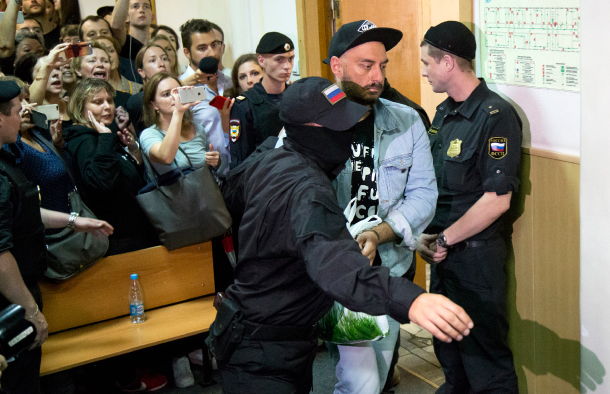 Russian theater and film director Kirill Serebrennikov is escorted into court in Moscow on Wednesday. Serebrennikov is suspected of embezzling 68 million rubles (1.1 million dollar) of government funds that were earmarked for a production at his theater. [AP/YONHAP]

MOSCOW - To a full house and rapturous applause more suited to one of his sold-out productions, Russian theater and film director Kirill Serebrennikov appeared in court Wednesday and was placed under house arrest pending an investigation into charges that he embezzled government funds allocated for one of his projects.

Serebrennikov denies any wrongdoing, and the case against him is widely seen as part of a crackdown on freedom of expression in Russia.

His arrest Tuesday sent shockwaves through the Russian art community. Hundreds of well-wishes and colleagues gathered outside Moscow’s Basmanny Court on Wednesday to cheer him.

His cutting-edge productions include drama, opera and movies. He has won broad acclaim for satires mocking official lies, corruption and a growing hard-line streak in Russian society.

The Investigative Committee that deals with high-profile crimes has accused Serebrennikov of scheming to embezzle 68 million rubles (about $1.1 million) in government funds allocated for one of his productions and the projects he championed between 2011 and 2014. A prosecutor at Wednesday’s hearing said two other suspects in the case had testified against him.

An accountant and one senior manager are in custody and another manager is under house arrest until the probe is complete. The director was briefly detained and questioned in May but investigators stopped short of saying they suspected he was involved.

Serebrennikov said he was dismayed by his late-night arrest in St. Petersburg, where he was shooting a movie.

“I never thought I’d end up behind bars here and I wasn’t going to flee anywhere,” he told the court from a cage that defendants in criminal cases are typically kept in, adding that his foreign travel passport had been taken from him earlier. “I did not obstruct the investigation in any way. I cooperated with the investigation and told all the truth I knew.”

Serebrennikov rejected accusations that he helped to embezzle government funds earmarked for the Platforma project, which merged theater, music, dance and multimedia, saying that the money was used to finance “big and bright” shows that spawned young talents.

The first senior government official to comment on Serebrennikov’s arrest, Culture Minister Vladimir Medinsky, said he “knows for sure this isn’t a frame-up,” adding, “I have a source.” He did not elaborate.

At the start of the hearing, Serebrennikov’s lawyer read out a who’s who of Russian arts and culture figures, including the director of the Bolshoi Theater, who have submitted pleas for his release.

Some turned up in court to personally vouch for the director, calling him the pride of Russia. Serebrennikov petitioned to be released on bail, saying he needs to finish a movie and a theater production.

“I’m trying to make our country culturally important and powerful on a global scale,” said Serebrennikov whose movie, “The Student,” won a prize at the Cannes film festival last year. “I have no intention to run away, my work is the meaning of my life.”

Serebrennikov’s speech in court was drowned out by cheers and chants of “Kirill” from hundreds of supporters who gathered outside the courtroom.

“Everyone was stunned,” said actor Talgat Batalov, who was going to appear in a play Serebrennikov was going to direct. “It’s a shock for all of us. Although we in Russia are hardly surprised at anything anymore, this is complete lawlessness.”

Alexei Arkhipov, who works in the cinema industry, sees the director’s case as a precursor to an upcoming crackdown on Russia’s creative classes.

“It’s not a criminal case, it’s a statement from the government to a certain group of people,” he said. “They are telling us: ‘We don’t want you anymore.’”

Serebrennikov’s sold-out productions have been a key part of Moscow’s theater scene for years. In September, he was to direct an opera in Stuttgart, Germany.

Shaking his head in disbelief, Serebrennikov, in a black cap and a black T-shirt, listened Wednesday as the judge rejected the plea to release him on bail and placed him under house arrest, banning him from any communication with the outside world at least until Oct. 19. He can’t make phone calls, receive messages or use the internet.

While Serebrennikov had the support of some senior government members and his theater received lavish state funding, his work touched upon the little-discussed subjects of sex and politics, attracting the ire of conservatives who protested against the use of state funds to finance his endeavors.

In July, the Bolshoi canceled a much-anticipated ballet about dancer Rudolf Nureyev directed by Serebrennikov just three days before the opening night.

The Bolshoi denied reports that the Nureyev ballet had been scrapped because of its frank description of his gay relationships, a taboo under a strict Russian law banning gay propaganda, but many in Moscow’s art scene saw it as a return to censorship. AP