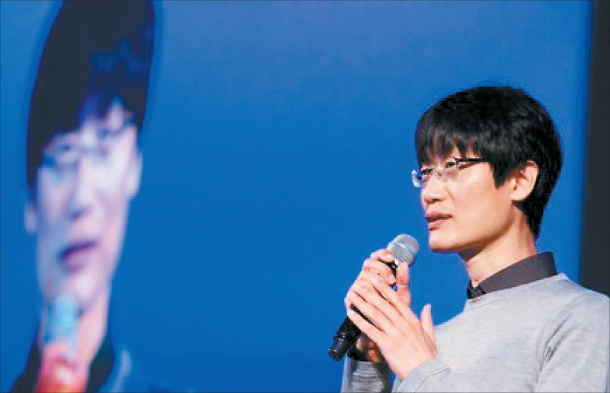 Lee Hae-jin, co-founder of Naver, speaks at the opening ceremony of the company’s developers’ conference at COEX in southern Seoul in October last year. [YONHAP]

Korean tech giant Naver has Google-sized ambitions. It is already the country’s most popular search engine, runs a cadre of mobile apps and is developing software embedded with artificial intelligence.

It is also trying very hard to avoid the label of “conglomerate.”

A day earlier, he tried in vain to sell the same amount of shares.

Now, the legendary 50-year-old entrepreneur who founded Naver after leaving Samsung holds a 4.31 percent stake in the company, down from 4.64 percent.

A Naver spokesman said the company did not know the exact reason for Lee’s stock sale, saying it was a personal decision. But analysts believe Lee is reducing his ownership of the company in protest of government regulations that could put Naver under stricter rules which typically apply to large family-owned conglomerates, known in Korea as chaebol.

Next month, the Fair Trade Commission is expected to list any corporation with assets of 5 trillion won or more as a “quasi-chaebol.” Companies in that group will be subject to various limitations and obligations, including making their business transactions more transparent and designating a chairperson or owner to report to the Fair Trade Commission. Owners will have to take legal responsibility for the business, including going to jail in cases of fraud, and family members will be restricted from receiving personal benefits.

Given Naver’s assets as of the first quarter of this year totaled 6.44 trillion won, the company is almost certain to end up on the quasi-chaebol list. But Lee and Naver are protesting. The co-founder, known to be somewhat of a hermit, paid a rare visit to the Fair Trade Commission’s office in Sejong, about 75 miles south of Seoul, on Aug. 14 to distance himself from other conglomerate owners, arguing he has little influence in governance matters at the company.

”Naver already has the kind of ideal governance structure that the Fair Trade Commission is trying to establish,” a Naver executive said. “If the government goes ahead with defining Naver as a quasi-chaebol and makes it look like an entity that is controlled by an individual, it will have a negative impact on its global business.”

Unlike other large companies, Naver does not have a chairman. Lee is the largest individual shareholder, but his ownership of the company represents less than a tenth of what other conglomerate owners typically own in their businesses. Samsung Electronics Vice Chairman Lee Jae-yong and his siblings, for instance, hold 40 percent in Samsung C&T.

Instead, Naver is run by Han Seong-sook, who climbed the corporate ladder after joining the company in 2007.

According to Naver’s investor relations guide from 2016, foreign investors own the most, at 60.4 percent, followed by the National Pension Service with 10.6 percent and other domestic institutions at 8.6 percent.

Shares of Naver, ranked ninth on the Kospi in terms of market capitalization, edged down 0.26 percent on Thursday to close at 771,000 won.