Samsung forges ahead with its Note8 phablet

Samsung forges ahead with its Note8 phablet 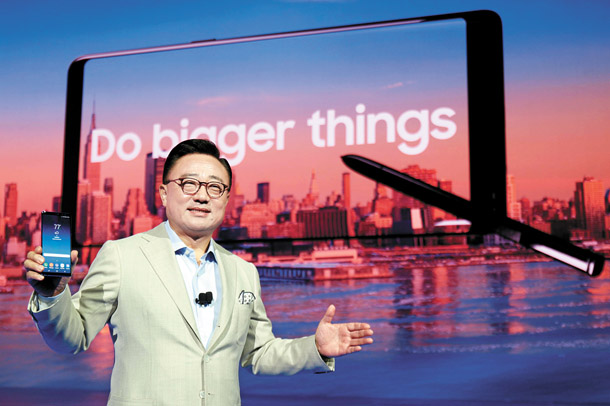 Samsung Electronics’ Galaxy Note8 phablet unveiled Wednesday in New York is expected to be priced below 1 million won ($886), contradicting industry speculation that the jumbo device could be the priciest phone made by Samsung.

“Customers feel a great burden when price goes over a million won,” said Koh Dong-jin, president of Samsung Electronics’ mobile business division at a press briefing held right after the so-called unpack event for the Note8. “We are trying to get the price [below 1 million] if possible.”

According to Koh, the company is currently in late-stage discussions with mobile carriers worldwide regarding the phone’s price. The price for the Korean market will likely be decided around Sept. 10.

Based on Koh’s indications, industry insiders are estimating the new phone will be priced at a level similar to the Note7, which was 988,900 won in Korea and $850 in the United States for a 64 gigabyte model. 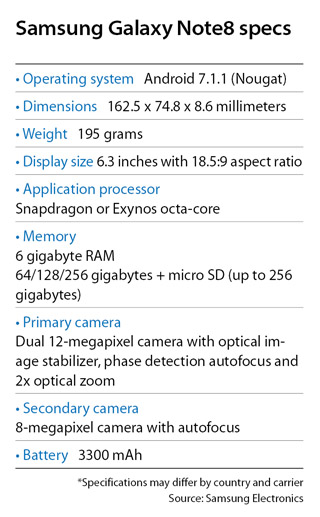 Industry analysts had expected it would be inevitable for Samsung to raise the price over a million won level due to hardware upgrades and increased production costs.

The new phone boasts the widest display size of all Galaxy family devices and comes with an upgraded version of a digital pen, dubbed the S-pen, which gives the Note series its unique identity. The Note8 is also the first Samsung phone that offers a dual camera similar to the camera on the iPhone 7 Plus.

Samsung is forging ahead with the Note model even after the disastrous recall of the Note7 in 2016, which was prone to exploding or melting down.

“None of us will ever forget what happened last year,” Koh admitted in New York Wednesday.

The Galaxy S8 and S8+ smartphones, released earlier in the year, had no problems with batteries, so the market believe Samsung has gotten past the Note7 debacle in technical terms.

“Samsung is likely to focus more on recovering the sustainability of the Note product lineup rather than on expanding sales,” said Noh Keun-chang, an analyst from HMC Investment Securities.

But Koh expressed confidence that the Note8 will sell better than the Galaxy Note5 phone, one of the most popular in the series. It sold over 11 million units in its first year of release.

“The upgraded S-pen and Samsung’s very first dual camera-mounted phone will enable customers to do things that were previously impossible with smartphones,” Koh added.

The most notable upgrade of the pen is that consumers can now create “live messages,” which are text messages animated into short video files and saved in the phone. The messages turn into moving animations similar to moving emoticons used on social media and chat apps.

The instant memo feature has been upgraded so that users can write and edit memos even without unlocking the device.

While the digital stylus offered translations on a single word basis in previous Note devices, it is now capable of translations of whole sentences.

A user only needs to highlight a sentence with the pen.

Some industry insiders had predicted the S-pen might come with an artificial intelligence-based microphone that could remotely control the device. That didn’t happen.

The Note8’s dual-lens camera is Samsung’s first. The dual-lens system enables users to show depth in pictures by blurring the background of a person’s portrait. The cameras have optical image stabilizers that help people shoot better photos in dynamic situations. Apple and LG devices already have dual-lens cameras.

The Note8’s display is larger than ever.

The company decided to go safe with the battery rather than trying to push its limits. The Note8 comes with 3,300 milliampere-hour (mAh) battery, 200 mAh smaller than the Galaxy S8, but 100 mAh larger than the Galaxy Note Fan Edition, a refurbished version of the Note 7 made out of unused inventory of the recalled phone released last month.

Other features offered by the Note8 are the AI assistant system Bixby and biometric recognition systems. It is also waterproofed.

“Considering efforts to differentiate the phone by upgrading the S-pen and potential demand from Note fans, it won’t be hard for Samsung to ship 10 million Note8s by the end of this year,” said Nok Kyoung-tak, an analyst from Eugene Securities in a note Thursday.

Preorders for the phone will begin on Aug. 24 in the U.S. and from Sept. 7 in Korea. Official sales of the product will begin in Korea from Sept. 15 and in other countries after that.

The Note8 is expected to compete with Apple’s new iPhone as well as the Mate 9 from Huawei Technologies and LG Electronics’ latest V series.