Tepid 25th for Korea and China

Tepid 25th for Korea and China 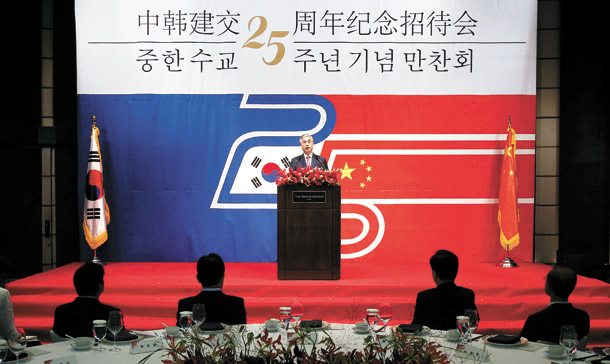 Chinese Ambassador Qiu Guohong addresses a reception at the Westin Chosun Hotel in central Seoul Thursday to mark the 25th anniversary of ties between Korea and China, attended by Korean government officials, diplomats and economic leaders. The two countries did not hold joint celebrations as they did five years ago. [YONHAP]

As Korea and China marked 25 years of diplomatic ties Thursday, their leaders exchanged congratulatory messages that cautiously emphasized the rebuilding of mutual trust amid strains over the deployment of a U.S.-led antimissile system.

But no joint celebrations were held to mark 25 years since the launch of formal diplomatic relations on Aug. 24, 1992 and neither the Korean nor Chinese foreign minister attended embassy receptions in their capital cities.

In a message to Chinese President Xi Jinping, Korean President Moon Jae-in called for co-prosperity of the two countries and said he looked forward to further develop their relations into a “substantive strategic cooperative partnership that contributes to peace and development on the Korean Peninsula, Northeast Asia and the world.”

Korea and China upgraded their relations to a strategic cooperative partnership in 2008 under the Lee Myung-bak administration. Calling for a “substantive” relationship is being interpreted as the Moon administration’s call for China to actively cooperate on resolving the North Korea nuclear issue.

The Korean Ministry of Foreign Affairs said Thursday that Moon stressed he puts “serious consideration into Korea-China relations” and recalled his summit with Xi in July on the sidelines of the G-20 summit in Hamburg Germany, where the two sides built a consensus on the direction of developing bilateral ties.

Moon also was said to have lauded the development of the two countries’ relations in various areas over the past 25 years and said that “this is the result of the close communication and exchanges between the two countries’ governments and people to build mutual understanding and trust which served as a basis to develop more mature relations.”

Xi said he hopes the two sides can “work together to solidify political trust and deal with differences appropriately, to advance relations in a stable and healthy manner,” according to the ministry here.

The Chinese leader did not directly refer to the Terminal High Altitude Area Defense (Thaad) system issue. China has engaged in a series of retaliatory measures against Korean businesses, its entertainment industry and tourism since Seoul and Washington announced the decision to deploy the Thaad missile shield in July 2016.

Xi also said that he “takes into very serious consideration Korea-China relations,” and that he recognized that the continuous development of bilateral relations over 25 years “provided both countries’ people substantial benefits” and that “the fruits of the two countries relations are valuable and contributed to peace and development in the region.”

Cho June-hyuck, spokesman of the Korean Foreign Ministry, said at a briefing that the exchange of messages of the two leaders “was an opportunity to once again emphasize the importance of the Korea-China relations and joint willingness to develop our relations further.”

Korean Minister of Foreign Affairs Kang Kyung-wha called for a bolstering of bilateral cooperation based on the consensus reached by Moon and Xi during their summit in July, and to continue to work toward fundamentally resolving the North Korea nuclear issue. Chinese Foreign Minister Wang Yi echoed Xi’s message and called for bolstering communication and exchanges between the two ministries and to “enhance mutual understanding and trust.”

Kang later Thursday departed for Moscow, where she is scheduled for talks with Russian counterpart Sergey Lavrov ahead of Moon’s visit to Russia to attend the Eastern Economic Forum in Vladivostok early next month.

China sent Minister of Science and Technology Wan Gang to lead its delegation to a reception organized by the South Korean Embassy at a hotel in Beijing Thursday, according to the Korean Foreign Ministry. Wan also serves as vice chairman of the Chinese People’s Political Consultative Conference, the country’s top political advisory body, which is a vice premier-level position. China is seen to have sent a high-ranking official who does not directly deal with Korea relations, establishing a courtesy but also demonstrating a diplomatic coolness over the Thaad row. China’s Assistant Foreign Minister Kong Xuanyou also was scheduled to attend the reception in Beijing, which was expected to see some 500 Chinese and Korean attendees. It is scaled down from the 20th anniversary in 2012, when China and Korea held a joint celebration at the Great Hall of the People in Beijing attended by Xi Jinping, then China’s vice president. Kim Sung-hwan, Korea’s foreign minister at the time, attended a reception held by the Chinese Embassy at a hotel in Seoul.

China’s state-affiliated Global Times published an article Wednesday on the 25th anniversary of diplomatic ties which noted that Sino-Korean ties have soured over the Thaad deployment but called on both countries to learn from experience and build a stable and healthy relationship.

Zheng Jiyong, director of the Center for Korean Studies at Fudan University, told the paper that while the two countries’ relationship might have faced ups and downs, its “foundations have never been damaged” and the two sides should overcome the frictions and build political trust.