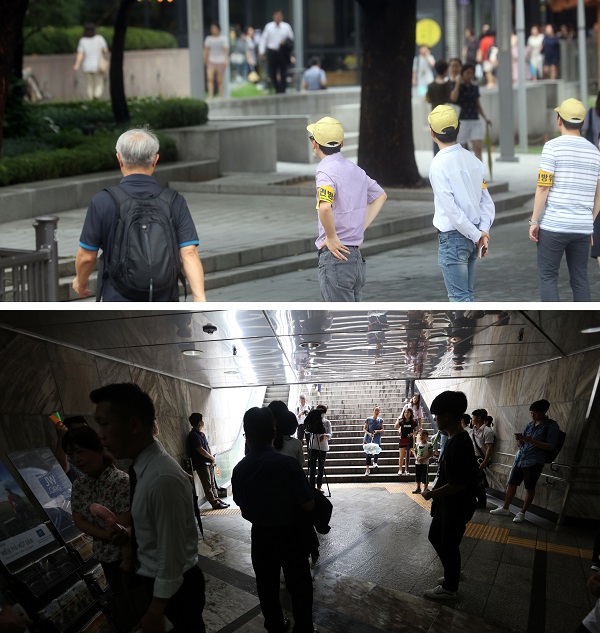 On Wednesday, the government conducted a meticulously planned air raid drill to better prepare residents for a North Korean attack — except no one seemed to notice.

When the siren sounded at 2 p.m. on the campus of Chonbuk National University in Jeonju, North Jeolla, students inside the main library looked up from their books and laptops for a second, puzzled, then continued reading and writing.

“What’s the siren for, do you know?” a 23-year-old student surnamed Kim asked a student next to her.
When the siren rang out at the square outside Seoul Station in central Seoul, some pedestrians glanced quizzically at the speakers for a second, then continued on their way.

At a golf course in Hwaseong, Gyeonggi, three men in their 50s and 60s were enjoying a game of golf when the drill began.
“There you go!” one of them shouted, watching his friend’s tee shot. They said they never heard the siren, and their game continued smoothly uninterrupted while the government staged a simulated act of war.

“All 50 million people in the country are to take part in the drill,” the Ministry of Interior and Safety had said in a statement. “The drill is to be conducted this time in all seriousness due to escalating security tension on the Korean Peninsula.”

“It is basic training that people need to be participating in,” said Minister of Interior and Safety Kim Boo-kyum. “I ask you all to take part with intent.”

But even when people were aware of what was happening, many in downtown Seoul, Daejeon, Hwaseong, Daegu, Ulsan and Jeonju were reluctant to follow directions. Some were even openly critical.

When the siren sounded in Nam District, Ulsan, bus No. 127 stopped and two local government officials in yellow jackets, indicating that they were working to assist people find nearby shelters, stood in front of the bus for the next five minutes. Five people got on the bus despite the bus driver’s protests.

The ministry had issued directions for all pedestrians on the road to enter underground shelters and stay there until 2:15 p.m., but many remained on the bus, idly using their smartphones.

“I know it’s a drill, but it doesn’t feel like one,” said Kim No-kyung, a 20-year-old college student.
“Please stay inside during the drill,” one official in a yellow jacket told a woman in her 20s as she walked toward the exit door of an Emart in Dunsan, Daejeon. She glared at the official and walked right past him.

“We can’t force people,” said Huh Sung-yoon, an official of the Civil Defense Division of the Emergency Preparedness Policy Bureau of the ministry. “The drill is voluntary. But this year the security situation is worse than ever. So the fact that people are still not taking part is quite a problem.”

He added, “The ministry is looking at what went wrong and what should be done. But we’ve really worked hard this year to try to inform the people about the drill by working with media outlets in advance. And the directions aren’t that difficult, just take cover underground for a few minutes.”

Huh said after the siren, explicit directions told listeners to listen to the radio for more information, but the instructions were in Korean only, and some expats told the Korea JoongAng Daily they did not know about the drill, even though the ministry said it worked with Arirang TV to share information in English.

“This is my third year living here but I didn’t know they had such a drill every year,” said Georgia Scott, an American who works as the English communications manager at Korea Taxpayers Association. “I didn’t see any information. [I knew] only because a friend posted a warning on a site [of some 8,000 expat women] on Tuesday.”

Scott added, “I was underground near YP Books in the Jongno 2-ga area,” Scott said. “I had just left the bookstore when the drill began and I was really looking around to see what other people were doing, to keep my eye out for officials to see what they were doing. But I didn’t see anything. Basically, life didn’t stop.”

“The problem is that most people think a raid will never happen,” said Lee Jae-oh, professor of Daejeon University’s national emergency management department. “The government needs to better educate people on how serious the situation is, and the people just need to get better at taking part.”

“I wouldn’t say I’m that concerned because I am pretty sure that there won’t be a war,” said a British resident in Seoul. “But it worries me that people don’t know what to do in a fire or [other emergencies]. After the Sewol, people said there would be more focus on educating people about emergency situations, but I haven’t seen that.”